The NMHH’s semi-annual mobile market report is based on the quarterly reporting obligation of the four operators using their own mobile telephone networks, and all mobile operators providing their services based on network contracts concluded with mobile operators owning their own networks. As the previous report looked at the period from the end of 2015 to the end of 2018, its results highlighted long-term, more spectacular processes. The new report supplements the previous one with data for the first half of 2019.

The report notes that the 4G networks have become more important and that consumers use an increasing number of 4G-ready devices. By the second quarter of 2019, more than 95 percent of mobile internet traffic and 17 percent of domestic call traffic used the 4G network, an increase of 1.4 percentage points in the former and 5 percentage points in the latter case compared to the end of 2018. The role of other networks is declining: while in mid-2019 three-quarters of voice traffic was still on 3G and 8.4 per cent on 2G, only 3.6 percent of mobile Internet traffic used networks lower than 4G. The number of SIM cards connected to mobile internet via 4G also increased by almost 4 percentage points in the first half of the year and exceeded 82 percent.

At the same time, internet traffic has also increased by four and a half times compared to the end of 2015, including over than 8 million GB higher data traffic in the first half of 2019, reaching a quarterly data traffic of almost 80 million GB by mid-year. Data traffic in the smartphone segment increased by more than 16 percent in the first half of 2019 to 51.5 GB, and specific traffic grew by more than 12 percent from 2.41 GB/month to 2.71 GB/month. Today, more than 93 percent of all 6.8 million mobile internet cards belong to the smartphone segment. Quite remarkably, the average monthly data traffic of smartphone retail users has already exceeded non-residential data traffic figures since the beginning of 2018. More subscribers travelling abroad use mobile internet services to a greater extent: year-over-year internet use abroad almost doubled between the first half of 2018 and the same period of 2019: it grew from 1.66 million GB to about 3 million GB, specific traffic increased from barely 0.5 GB to almost 0.75 GB, while the number of SIM cards with internet traffic abroad increased by a fifth, from 1.16 million to 1.4 million.

Domestic mobile phone traffic increased by nearly one-fifth between 2015Q4 and 2019Q2, with an increase of 5 percentage points in the first half of this year, and the specific traffic of SIM cards grew by 17 percent. For the first time, however, the figures indicate a slight decline in the number of text messages: subscribers sent 6 percent fewer SMSs in the first quarter of the year and 4 percent less in the second quarter compared to the same periods of the previous year. 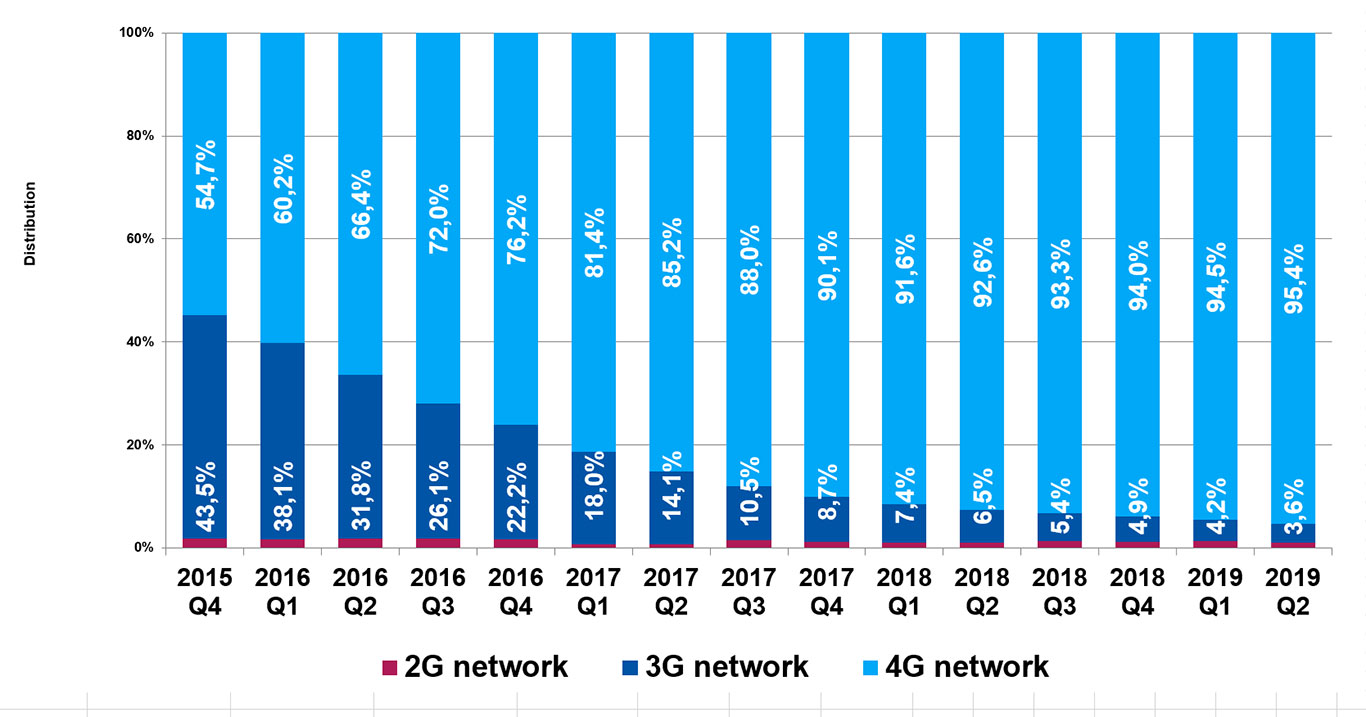 The market shares of operators basically did not change

On the mobile phone service market, Magyar Telekom was the market leader, with its share of around 45 percent of SIM cards with voice traffic between the end of 2015 and the first half of 2019. Number 2 on the market, Telenor’s share decreased by about 2.5 percentage points, while Vodafone, ranked third, increased its share by almost 2 percentage points. The share of other providers increased by slightly more than half a percentage point, but overall it did not reach 1 percent by the end of the first half of 2019.

Based on the number of SIM cards with mobile internet traffic, Magyar Telekom was again the market leader between the end of 2015 and the first half of 2019, with its share having increased by one and a half percentage points and reaching close to 45 percent at the end of the first half of 2019. The competition between Telenor in second place and Vodafone in third has been quite dynamic over the past three and a half years. In the second quarter of this year, Telenor accounted for 27.1 percent and Vodafone for 26.7 percent of the market. Even though the combined market share of other operators increased slightly over the three and a half years, it still did not reach 1.4 percent by the end of the first half of 2019.

Pre-paid subscriptions are on the decline

The mobile phone service market has been continuously saturated during the reporting period, i.e. since the end of 2015, as the number of SIM cards with voice traffic remained the same at 9.79 million units, and the average monthly volume of voice traffic of post-paid paid subscriptions is still 10 times higher than that of pre-paid subscriptions.

However, post-paid subscriptions are becoming more and more popular over the pre-paid segment: By the first half of 2019, almost two-thirds of SIM cards with voice traffic were post-paid compared to only 56.6 percent at the end of 2015, and 95 percent of voice calls were made using post-paid SIM cards.

The number of M2M SIM-cards – those which are related to inter-machine communication, requiring no human interaction – grew from 1.1 million to 1.15 million during the first half of this year.