For Safer Internet Day which is celebrated worldwide on the 8th of February this year, NMHH prepared a small campaign raising awareness of sharing intimate photos - mainly - among youngsters. Based on the reports received by IH, such abuse mostly occurs between adults, but children or their parents also asked for help due to such violations. The message of the campaign reinforces youngsters that they have the right to say no, they are not obliged to send any videos, images to anyone even under emotional manipulation. The campaign uses the term “red flag” as the indication of violent and manipulative behaviour, and something important for children to recognize so that they can pluck up the courage to say no in order not to become victims in such situations.

A 30-second video called “Ha úgy érzed, valami nem oké, igazad van” (If you feel, something is not right, you are right” will be primarily available on popular social media platforms (YouTube, Instagram, TikTok) on the week after Safer Internet Day.

Last year 442 reports were submitted to the hotline regarding content made accessible without consent, which constitutes an increase of 60% compared to previous year figures. They report the online sharing of photos, videos, voice recordings or other personal data about the reporting person or their children without the consent or permission of the person they are made of. The most reports received in this category referred to intimate images taken of adults, this has not changed compared to last year. 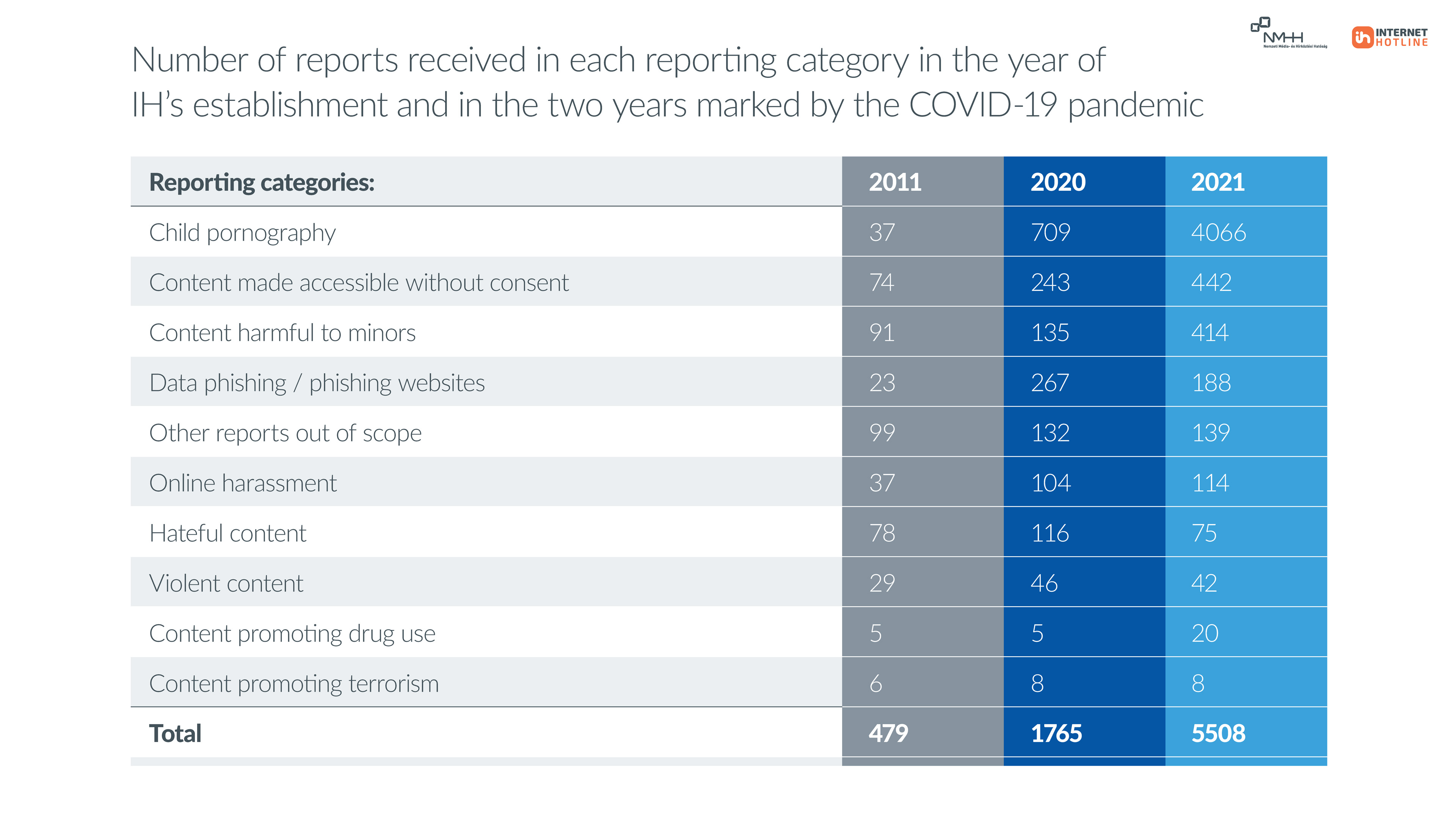 The darkest phenomenon of the internet, online sexual exploitation of children

A record number of content created about the sexual exploitation of children were reported at the IH in 2021. Last year a total of 5508 cases were reported at the service, three times more than in the previous year, and more than 70% of these were categorised as child sexual abuse material (CSAM). The Internet Hotline received a record number of reports on CSAM already in the first year of the pandemic, but 2021 surpassed this number six fold. Analysts of the hotline had to examine more than 6000 links related to the more than 4000 reports.

Last year the number of reports received via the web based reporting form and email doubled compared to 2020, but the majority of the content in 2021 came from international partners. Hotlines all around the world, cooperating under an association called INHOPE, share with each other via a safe software all the URL addresses they become aware of where CSAM is published. The Internet Hotline is notified in case CSAM is hosted on the servers of Hungarian service providers. In 2020, 130 cases were recorded through the database, last year almost ten times as many.

This is because, some hotlines started to use intelligent, automated search engines capable of reviewing websites without manpower, recognising already identified CSAM based on hash values, and notifying the hotlines of the concerned jurisdiction. Reporting is, of course, a two-way process: in 2021, the IH sent more than five hundred reports to INHOPE member hotlines, twice as much, as one year before.

In line with the normal practice of Internet Hotline all and any content allegedly classified based on their examination as child pornography is forwarded to the Cybercrime Department of the National Bureau of Investigation of the Hungarian Standby Police. In 2021, analysts turned to the police with 1163 cases. The pandemic years revealed that the dissemination of content related to the sexual exploitation of children is the darkest phenomenon of the internet known today, it is a challenge we can only combat through the tightest of international cooperation.

Anyone can report a case via the web based reporting form of the Internet Hotline under https://nmhh.hu/internethotline/