The NMHH award, handed out each year since 2015, was given this year to Gabriella Éles for over twenty years of work at the Authority and to photographer Éva Keleti to honour a lifetime achievement in professional excellence. The award was established to recognise outstanding accomplishments and lifetime achievement in the field of media, broadcasting and media services. 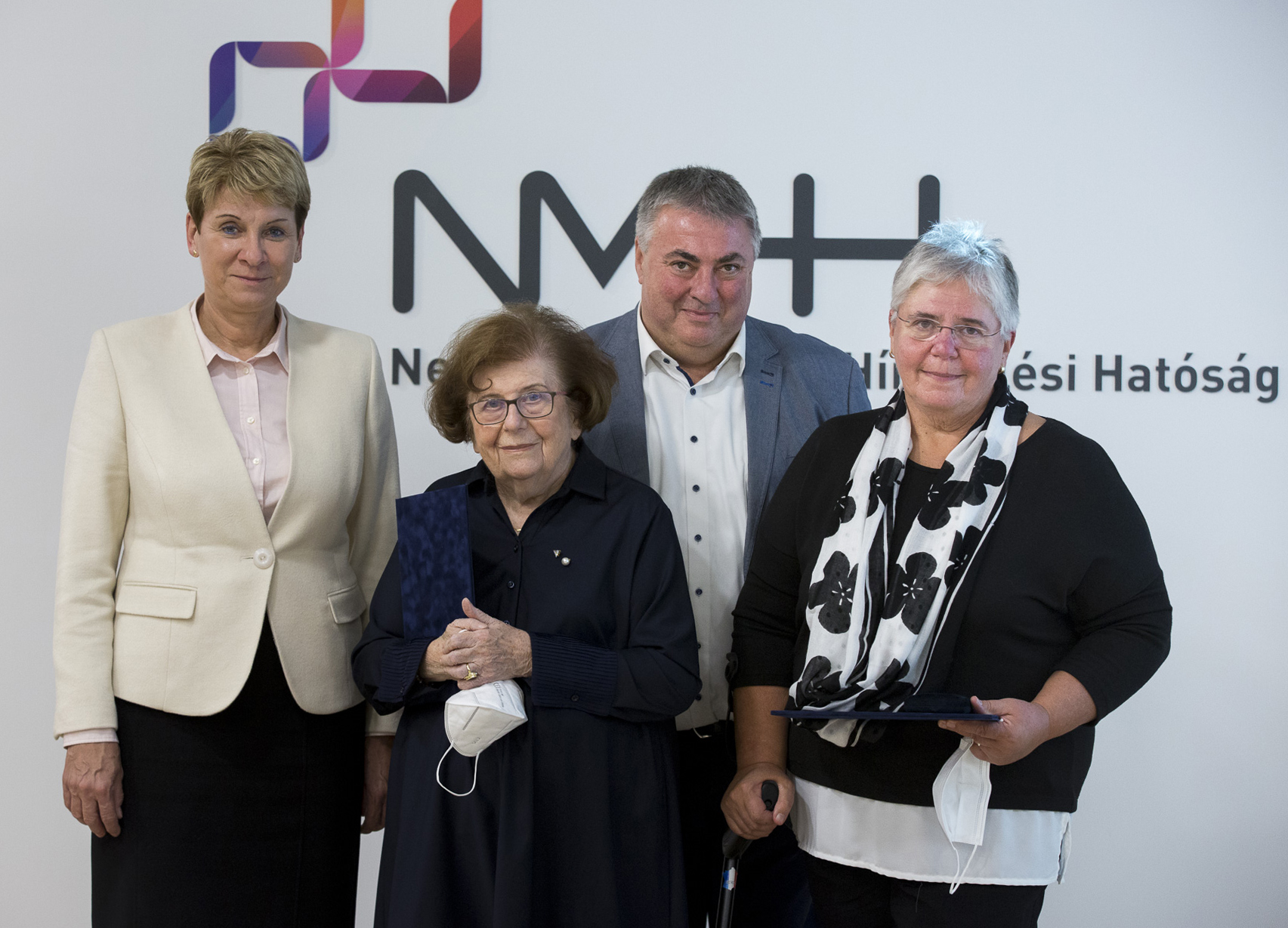 “In an age dominated by the media, attention is the greatest value. As the regulators of the media, we would like to draw attention to two persons who pay attention on an artistic level”, Director-General of the Authority Dr. Janka Aranyos-Börcs said in her welcome speech at a small event for epidemiological reasons held on Wednesday in the NMHH’s headquarters in Ostrom utca.

Gabriella Éles, Head of the NMHH Department of Programme Monitoring, started her career in 1999 at the Office of the National Radio and Television Board, the predecessor of the Authority, then moved on to the NMHH’s Office. She has made an outstanding contribution to the introduction of new, innovative test methods. Her career coincided with the development of the dual media system, i.e. the parallel operation of public service and commercial media, the introduction of institutional media regulation and, last but not least, the technological developments in the world. She works with the big picture in mind and has an impact on the whole media sector in Hungary. Her energy and diligence are legendary among her colleagues. Seeing her work as a service, she is community-minded, so not only his close colleagues but also the representatives of service providers can always count on her. “I am grateful for this recognition and for the support and expertise of colleagues who have always been there for me”, Gabriella Éles said on receiving the award.

The other award winner Éva Keleti, a Kossuth, Béla Balázs, Radnóti, Táncsics and Prima Primissima Prize-winning artist of Merit, left her studies in physics and chemistry at ELTE in 1951 to pursue photography. In 1955 she joined the Hungarian National Photo Agency (Magyar Fotó), a predecessor of the Hungarian News Agency (MTI). She has contributed a lot to make photojournalism a powerful medium in its own right, rather than a second-rate genre that illustrates text. She was the president of the Association of Hungarian Photojournalists, and also played a major role in the organisation of Word Press Photo exhibitions in Hungary. In addition to the Hungarian News Agency (MTI), she also headed the photo editorial departments of New Mirror (Új Tükör), HT Press, Gamma Photo Agency and Europress. She has edited album series of archive photos and has also taken the lead in talent management. Her unique perspective has become the corner stone of theatrical photography, and many people are fans of her portraits. After a break of almost thirty years, she started taking photographs again a few years ago, and at the end of 2019 the art gallery (Műcsarnok) organised a major retrospective exhibition of her pictures.

The award was presented to the artist by László Meszleny, member of the Media Council, who recalled his first childhood experience with Éva Keleti’s pictures in the corridors of the Opera House. “I am delighted with the award and thank you for the honour. For my whole career, I owe a debt of gratitude to all those who have helped me over the last ninety years, and to Hungary”, Éva Keleti said on receiving the medal.