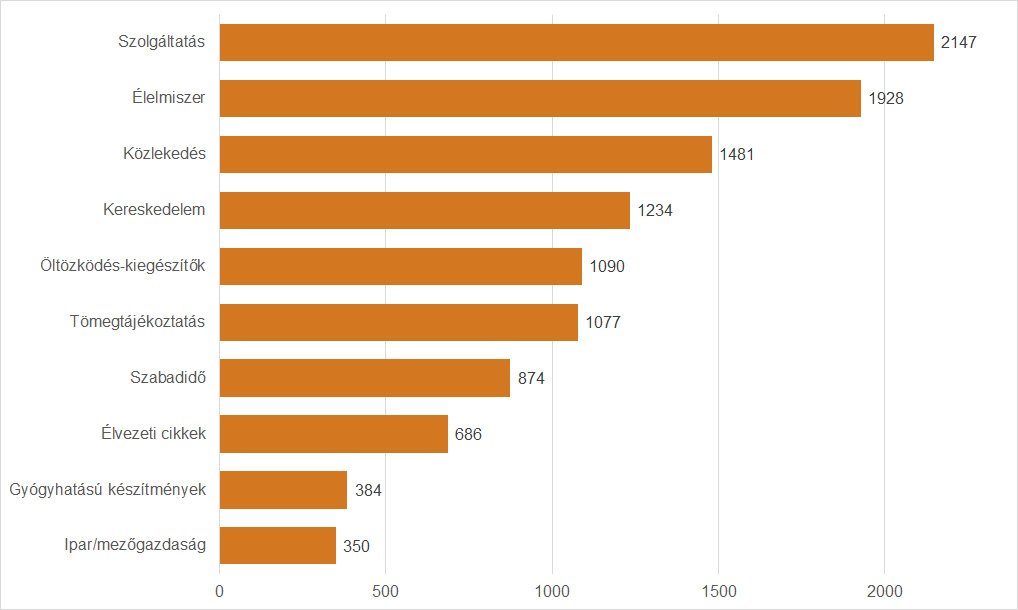 Hotels, health services and catering were the most advertised product sectors

The council adopted the latest study on product placements in own productions of national commercial televisions. In the first half of 2021, a total of 12 809 such advertisements were shown on RTL Klub and TV2 which is a 2% decrease compared to adverts registered in the same period in 2020 (13 151). This is still lower than in 2019 (17 796). The greatest number of advertisements – 2255 – were connected to Reggeli, which was followed by Az év hotele (1119) and Fókusz (1083), all programmes of RTL Klub. On TV2, the most product placements (578) were shown during Mokka. These advertised 1951 different brands, including the ALDI chain, which was featured the most, 699 times. Among the economic sectors, services were the most prominent, followed by food and trade. The study also examined virtual advertising. In the first half of the year, a total of 437 such virtual advertisements were broadcast: 11 on RTL Klub and 426 on TV2. While in the former they only appeared on the programme entitled Fókusz, in the latter more than half of them were related to quiz shows. Despite their more limited reach and novelty, such advertising is easy for people to remember for now, but their reception is clearly negative. The whole study can be read on the NMHH website.

The council warned the service provider of Rádió 1 Part in Siófok for deviating on a particular June day from its regular name, and for broadcasting fewer programmes for public service and helping local public life and everyday local life than it contractually agreed to. The service provider of Kölcsey TV was warned by the council for surreptitious advertising, because in a July broadcast of the Weather Report it included the exact address of a clothing store that sponsored the programme, which is forbidden to be part of a sponsorship message.

The council established that the winner of the tender published for the commercial use of the Budapest 96.4 MHz regional frequency is the sole tenderer LBK Base Kft. Following the formal review of the submitted tenders for the commercial use of Tatabánya 107.0 MHz and the community use of local frequency 102.4 MHz in Szolnok, the council called on Karc FM Média Kft. and Best Radio Kft. as the sole tenderers respectively to submit missing and additional information. During the content review of the tender procedure for the community use of regional frequency Budapest 105,9 MHz, the body requested information from LBK Sport Kft. who is the sole tenderer in this case too.