Every third internet user has a streaming service subscription (for films that can be watched without downloading), whilst every fourth downloads films acquired and uploaded by others, i.e. torrents. As this is often illegal, the true ratio is certainly higher, yet nevertheless, according to the respondents, every tenth internet user frequents international torrent sites and every fifth internet user visits Hungarian torrent sites. Overall, internet users most frequently refrain from using either of these and instead of downloading torrents or using legal, subscription-based streaming services (such as HBO Go or Telekom TV GO), well over one-third of internet users watch free streaming videos and films without downloading. Additionally, many opt for subscriptions: every fourth person chooses to forgo downloading torrents and subscribes to a legal service, whilst every sixth uses only torrent sites to watch films and every eighth continues to download torrents while also having a streaming service subscription. A further 3 per cent of internet users follow none of the above-listed trends: they only watch films that others download for them. Finally, the remaining one-eighth watch no films or videos from online sources.

Most of the respondents—66 per cent—still prefer watching online films and series on a bigger screen, yet nearly half of the viewers—44 per cent—watch content on their smartphones, albeit shorter videos and not feature-length films.

Generational differences in the use of social media and torrent sites

Downloading torrents is far more typical of twenty-somethings, or Generation Y—even those who have a streaming subscription—whilst an above-average ratio of the youngest, secondary school age generation either has a subscription or downloads torrents. Apart from Generation Z, such high rate of subscriptions is only found amongst the oldest respondents, yet they do not use torrents at all, as opposed to the younger generations. However, there was an exceptionally high rate of respondents over 70 years of age who only use free streaming options (such as YouTube). It is far less frequent for the members of the middle-aged Generation X to only watch films with a subscription and compared to other generations, they have a higher ratio of individuals who only watch films that are downloaded for them by others. Downloading torrents is far rarer amongst the older, “baby boomer generation”, yet more of them use free or subscription-based streaming services and they also have the highest rate of those who do not watch films from online sources.

Compared to generational differences, even greater deviations were found based on the sex of the individual and the number of social media sites they used. For example, there is a higher than average rate of those who watch films downloaded by others for them yet do not use streaming services or torrents amongst those who use no social media sites (or who have registered on, yet rarely visit such sites); these individuals also include the highest rate of those who do not watch films from online sources at all. Usually, the more profiles someone has, the more typical it is for them to download torrents and those who visit at least five different social media websites only use free streaming services at a higher than average rate.

Men show a far higher rate of downloading films via torrents—regardless of whether or not they have a legal streaming subscription. However, women indicated free streaming sites as their only source of films far more frequently and they also have a much higher rate of those who do not watch any films or videos and have no subscriptions for such services.

Those who watch films and series online admit that they become entirely engrossed in this activity and that it is hard to stop once they start watching something. Over the year preceding the survey, 85 per cent of film viewers indicated that they watched multiple instalments of films or episodes of a series one after the other without stopping. Three out of ten frequently do so. Every fourth online film viewer spends 5 to 10 hours straight with this activity. This form of online binge-watching is particularly characteristic of the youngest generations. 41 per cent of Generations Y and Z, i.e. those under thirty year of age, admit that they frequently binge-watch online films or episodes of series, whilst in the case of their parents, this rate is only 20-25 per cent or less. It seems that the younger someone is, the more time they spend continuously watching films, which unfortunately can often have physical and mental consequences indicative of addiction. One-third of twenty-somethings admit that they continuously watch films online for five or more hours, whilst one-third of younger, secondary school age children watch online series or films for seven or more hours.

The statistics show that online film viewing is becoming an increasingly solitary, isolated activity. For example, one-sixths of those who watch films online and are not living alone never watch films with their family members or roommates, whilst 56 per cent watch films sitting next to each other, yet everyone watches something separately on their own device, for example, one uses a laptop and the other their phone, so they do not share the same experience.

This survey was conducted between 18 November and 10 December 2019 via self-completed online questionnaires with a sample of four thousand participants. The population of the sample consists of internet users living in Hungary at least 16 years of age who use the internet at least once a week, whilst its representativity is based on a nationally representative personal survey of 3,200 people and the possible distortions of the final sample were corrected by researchers with a mathematical-statistical process of weighting. The online survey and the personal survey it was based on were prepared by Ariosz Kft. for the NMHH. 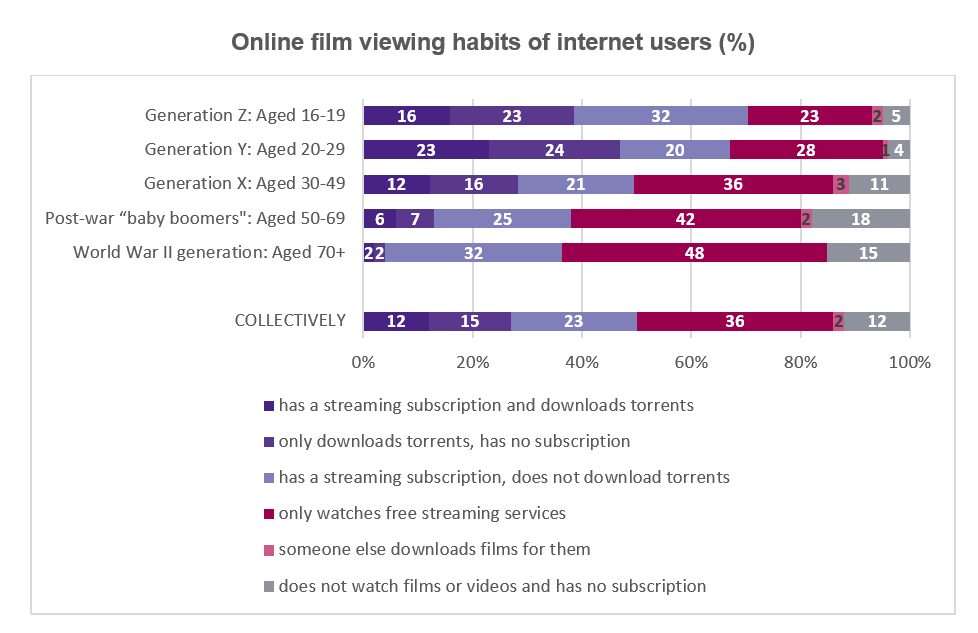 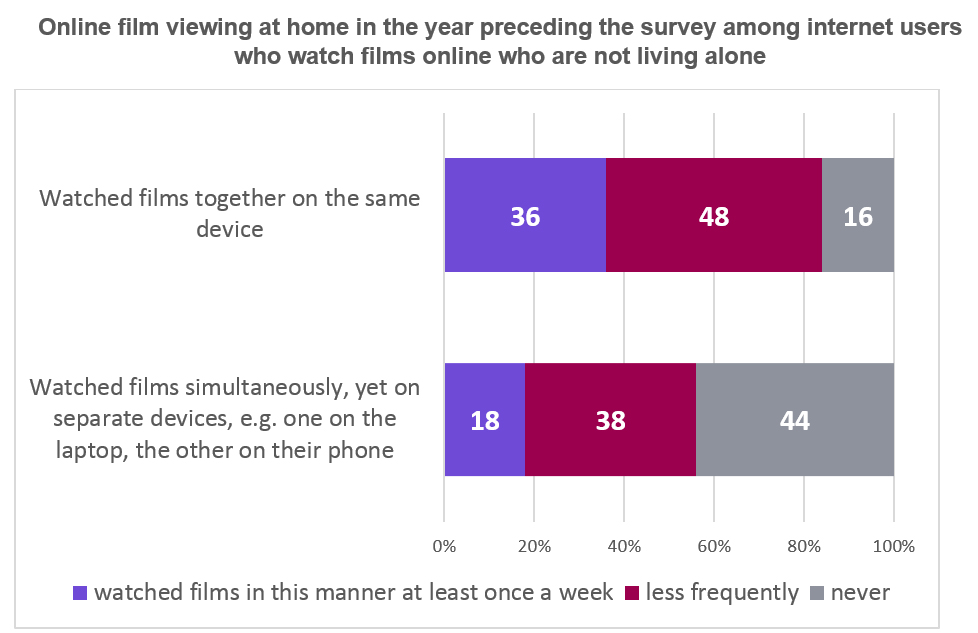