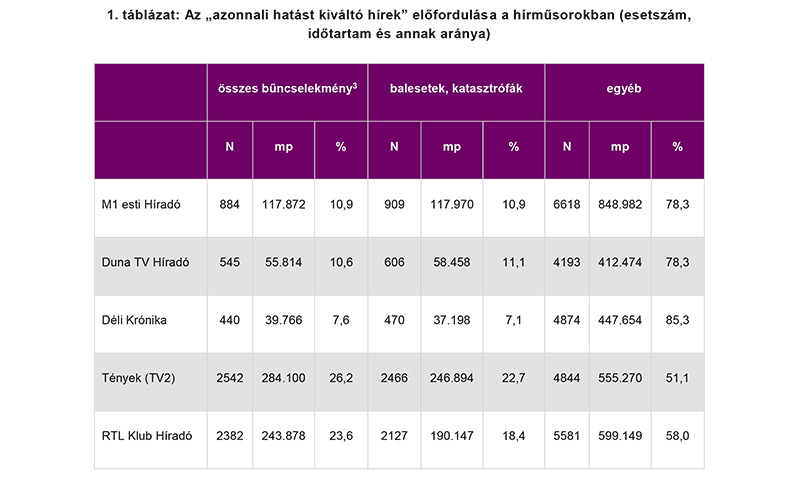 At the request of the operator, the Media Council has extended the media service provision rights held by the operator of the community radio station InfoRádió broadcasting on the local radio frequency Budapest 88.1 MHz for another five years, until 1 September 2024.

The Media Council has approved the request of the winner of the tender procedure for the Zalaegerszeg 88.9 MHz local radio frequency to start the operation of the commercial radio station 88.9 – Best FM on 19 August instead of the original deadline of 20 June and has allowed commercial radio station 100.7 – BEST FM broadcasting on the Eger 100.7 Mhz local frequency to modify its unique image, central elements and broadcast plan commitments. The Media Council has recognized Gólya Tv, operated by Cuttingroom Bt., as a public media service.

On Thursday, the Media Council finalized and published on its website the invitation to tender for the commercial use of the Békés 94.4 MHz local radio media service. Offers can be submitted on 8 July. Additionally, the Media Council has approved the draft invitation to tender for the use of the Miskolc 95.1 MHz regional radio media service, which was also published on Thursday.

The Media Council imposed a fine of HUF 1.45 million on the operator of TV2 for airing content at an inappropriate time and with an “age 12 circle” on one of the April broadcasts of the morning infotainment programme entitled Mokka. The programme’s treatment of sexual perversions should have only been broadcast between 9:00 p.m. and 5:00 a.m. with an “age 16 circle”.

The Media Council imposed a fine of HUF 1.05 million on the operator of Rádió 1 for discussing various sexual perversions without any counterpoints on three occasions in April in the programme entitled Balázsék, classified by the media service provider as not advised for those under 12 years of age, even though this could have only been broadcast between 9:00 p.m. and 5:00 a.m. with an “age 16 circle”.

Based on the review of a programme week in March, the Media Council imposed a HUF 10,000 fine on the operator of local, community Mára Rádió Ibolya broadcasting in the Danube Bend region for deviating from the authorised structure of the networking with Budapest 88.8 MHz, airing fewer self-produced programmes and Hungarian music than stipulated in its public contract, as well as for repeatedly using names other than its own denomination.

Based on a citizen's report, the Media Council initiated proceedings related to the 10 May edition of the Bezár a bazár! programme aired on TV2 in order to determine whether the media service provider issued appropriate age ratings to the programme.

A study approved by the Media Council which examined the 2018 broadcasts of the M1 esti Híradó, Duna TV Híradó, Kossuth Rádió Déli Krónika, TV2 Tények and RTL Klub Híradó news programmes shows that last year again the programmes did not exceed the statutory 20% limit for presenting crimes for purposes other than providing information to the public. Tények remains the news programme with the greatest coverage of crimes (19%), followed by RTL Klub Híradó with 15.9 percent (the rates show a slight increase compared to 2017: at the time, Tények had a 15.6%, whilst RTL Klub Híradó had a 14.9% coverage). The authority also assessed so-called “instant-impact” news reports that provoke emotions with little relevance to public life, including reports about domestic, traffic and work accidents and natural disasters in addition to crimes. Such news compilations made up 48.9% of Tények and 42% of RTL Klub’s Híradó programmes, representing an increase in both channels compared to 2017 (TV2: 46.9%, RTL Klub: 40.9%). The full study is available on the NMHH website.

Grants totalling HUF 51.2 million were allocated for the plans of twenty radio dramas through the Miklós Cserés tender of the Media Council’s Hungarian Media Patronage Programme announced last year. The work entitled Villámlik messziről… (Thunders from afar) will be produced as a standalone radio drama dealing with the period between World War I and the Treaty of Trianon, whilst the radio dramas entitled Az utolsó parancs (The Last Order) and A kézmosás fontosságáról (On the importance of washing hands) deal with the tragedy at the Don River bend and the figure of Ignaz Semmelweis, respectively. Seventeen new series have received grants, including an adaptation of Magda Szabó’s radio drama entitled Békekötés (Making Peace), as well as adaptations of Krisztina Tóth’s series of short stories, Széchenyi anecdotes and the story of escape artist Béla Móka. A series is being produced on the stolen crown of Franz Joseph I and the “stuffed” assistant of Ignác Born, responsible for establishing the world’s first international scientific association. A hipnózis halottja (The Deceased of the Hypnosis) deals with the tragedy of a Hungarian psychic, whilst Hovatovább Magyarok (Furthermore, Hungarians) relates the tales of famous Hungarians such as Sámuel Teleki and Ottó Herman. A Kékszakállú (Bluebeard) deals with the agonies of relationships, Ahogy megcsillan (As it Twinkles) focuses on a pair of boys searching for a human trafficker, whilst A gránátalma íze (The Taste of Pomegranate) deals with coming-of-age issues. Children can enjoy Süsüke, a sárkánykirályfi (Süsüke, the Dragon Prince), Földanyó és a flórik népe (Mother Earth and the People of Flories), Budapesti tündérmesék (Fairy Tales of Budapest) and A piros tengeralattjáró (The Red Submarine), filled with underwater adventures. Múltaknák (Mines of the Past) is a treatment of the fictitious future of Salgótarján, while Osztozkodók (Sharing) relates the tale of a stolen winning lottery ticket.

For yet another year, the Media Council’s Patronage Programme will provide opportunities for the technical development of community television stations and radios in line with the invitation to tender with an allocation of HUF 110 million, approved at this week’s session. For the first round, solely electronic applications are accepted until 11 July. Winning bidders may receive grants not exceeding 80% of the total planned costs, whilst community television stations will receive no more than five, community radios no more than three and small-community radio stations no more than one million HUF in developmental funds.

The Media Council will again provide a total of HUF 1.8 million in support to the 15th Göcsej Film Festival hosted on 14 September for the winners of the short film, documentary film and featurette categories. The winners of the first prize will receive HUF 250 thousand, the second and third place winners HUF 150 and 100 thousand, respectively, while the winner of the Annamária Szalay Film Award will receive HUF 300 thousand.

The full agenda of the Media Council’s weekly sessions can be found on its website, along with the minutes of meetings and all decisions taken; the latest decisions will be published after the required validation and administration period.