This week the Media Council decided to support the production of twenty-five regular local and regional radio programmes for one year with a total of HUF 75 million allocated for the first round of this year’s tender announced under the media patronage programme. InfoRádió and Trend FM of Budapest, Rádió Most Kaposvár, Rádió 1 of Komló, Gyöngyös, Sopron and Pécs, Kunság Rádió of Kiskőrös, Magyar Katolikus Rádió of Debrecen, Rádió 88 of Szeged, Rádió Szentendre, Forrás Rádió of Tatabánya, Aktív Rádió of Szolnok, Rádió M of Miskolc, Vörösmarty Rádió of Székesfehérvár, Paks FM and 98.4 Mega Rádió of Békéscsaba received non-refundable support for the production of new programmes. Rádió Most Kaposvár, Rádió Törökszentmiklós, Rádió Szarvas, 94.5 Rádió 1 of Székesfehérvár, Gong FM of Kecskemét, Gyömrő, Nagykőrös and Csongrád, Tamási Rádió and Egerszeg Rádió, received funding for the production of public-service magazines and Radio Monošter of Szentgotthárd for a thematic magazine programme.

The Media Council accepted the study on the product placements in self-produced shows of national commercial televisions broadcasted in the second half of 2018. Over a half-year period, a total of 18,638 product placements – i.e. over one hundred placements per day – were featured on RTL Klub and TV2, which was somewhat above the figures registered for the same period of 2017 (18,341). Most of these in-programme ads were aired in RTL Klub’s programmes Reggeli (3054), Fókusz (1572), Az év hotele (1152) and Story Extra (847), only to be followed by TV2’s Mokka (736). A total of 2579 brands were advertised in product placements, with Spar/Interspar being the most popular (1058 spots), and this brand was in the lead at RTL Klub as well. The top TV2 advertisers was Fiskars with 95 appearances, which, however, failed to make the top 10 in the aggregated list.

Among the various economic sectors, services appeared the most often, followed by the food and recreation sectors. The top advertisers in the services sector featured hotels and guest houses, while the food sector was dominated by soda drinks, and the recreational sector by music festivals. 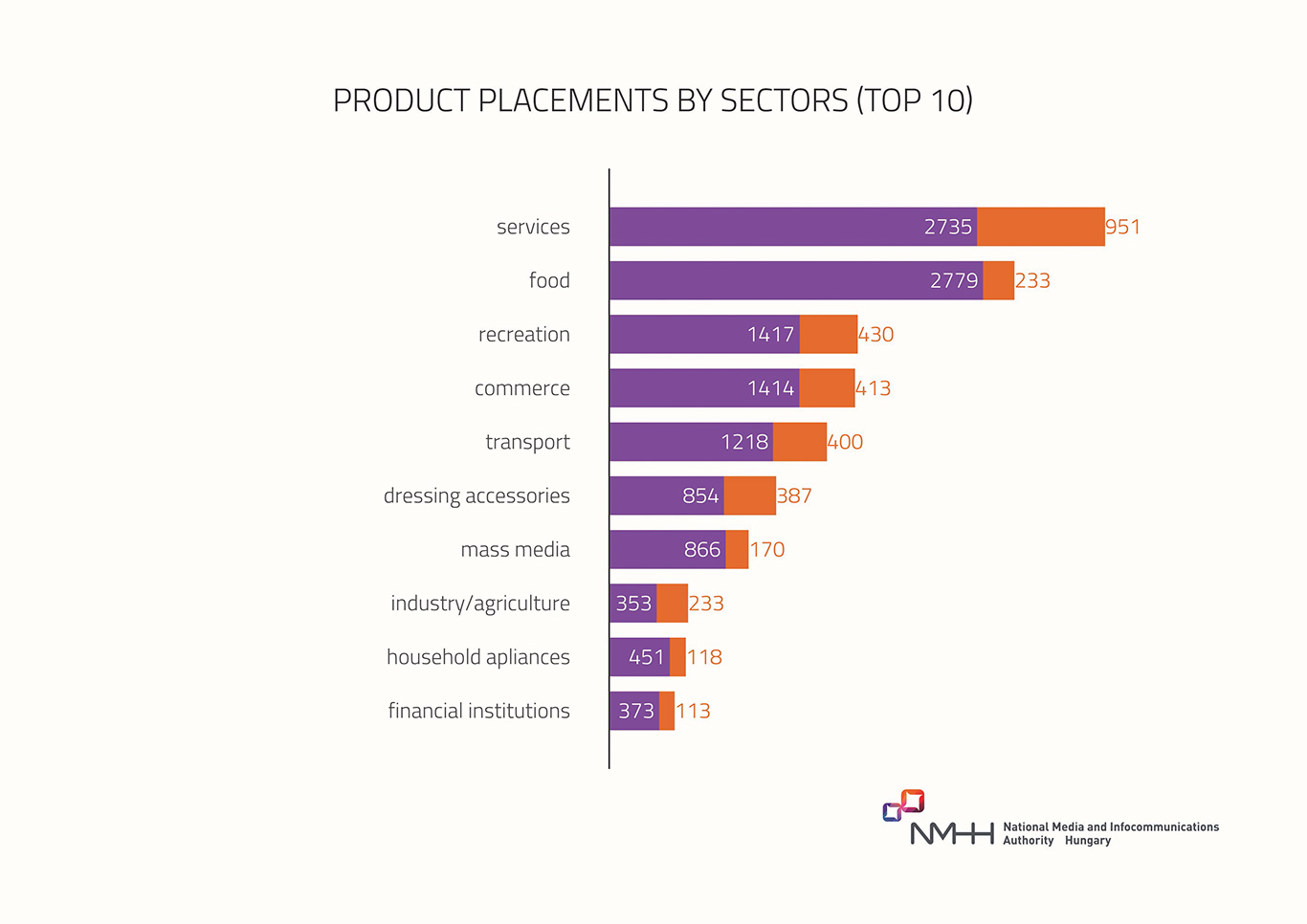 Based on a citizen report, the Media Council is investigating the preview of the TV2 programme “Bezár a bazár!”

The Board will not initiate proceedings in response to the reports objecting the short Origo advertisements aired on TV2 between 18–20 April because the advertisements in question were within the sensibility limit, so viewers could decode the message and realise that they were watching advertisements.

After formal examination in the tender procedure for the Tihany 105.7 MHz local commercial radio frequency, the Media Council registered Rádió Helló Kft., while for both the Gyöngyös 102.2 MHz and the Sátoraljaújhely 90.6 MHz local community radio frequencies, the sole bidder Magyar Katolikus Rádió Alapítvány was declared as the winner. The board has requested additional information from Fehérvár Rádió Kft. as part of the substantive review in the tendering procedure of the Győr 96.4 MHz regional commercial radio frequency.

The board finalised the texts of the calls for tenders for the commercial use of the local radio frequencies of Baja 94.3 MHz and Paks 107.5 MHz, and will publish them on its website on 16 May. Bids may be submitted in mid-June.

At the request of the operator, the Media Council authorised the local commercial radio station currently operating on the Debrecen 104.6 MHz frequency and under the name Best FM Rádió to change its name to 104.6 Best FM beginning 1 June.