This year, NMHH continued its weekly review of the daily recaps of Való Világ powered by Big Brother after 10.00 p.m. and the accompanying late night talk show BeleValóVilág powered by Big Brother. Based on the experience of the previous eight seasons, the “VV-barometer” once again rated this year’s season with the six variables of sexuality, nakedness appearing in a sexual context, profane expressions, smoking as well as direct and indirect alcohol consumption.

There was a great amount of profane expressions aired in the recaps of the first six weeks of the series launched on 4 November last year: a total of 306 in the second week and 299 in the third week – thus the villa residents articulated profanities approximately in every minute. With a single exception, in the first one-and-a-half months, there were over two hundred instances of objectionable content every week. The fewest number of profanities appeared in the eighth week, in a total of 64 instances. Compared to the previously aired recaps, in the second half of the series, the number of profanities has noticeably decreased, to almost half their previous amount. Compared to the previous season aired in 2016, the series featured significantly fewer profanities: a total of 2438 instead of the previous 3579 instances for all the recaps. This means that whilst in the eighth season, profanities were featured approximately once in every one-and-a-half minutes, in the latest season this only occurred in roughly every two minutes. Two years ago, the was no programme week in the eighth season that went by with fewer than one hundred profanities, with a record of 457 instances registered by NMHH in the fourth week. The accompanying late night talk show also produced alarming opening shows in the new series, with the first week featuring a total of 90 profanities in the programmes, which increased to 149 in the second week before dropping to one-third of this amount in the third (47 instances). However, the highest number of instances in the second half of the series only amounted to 27 in the case of the late night show. 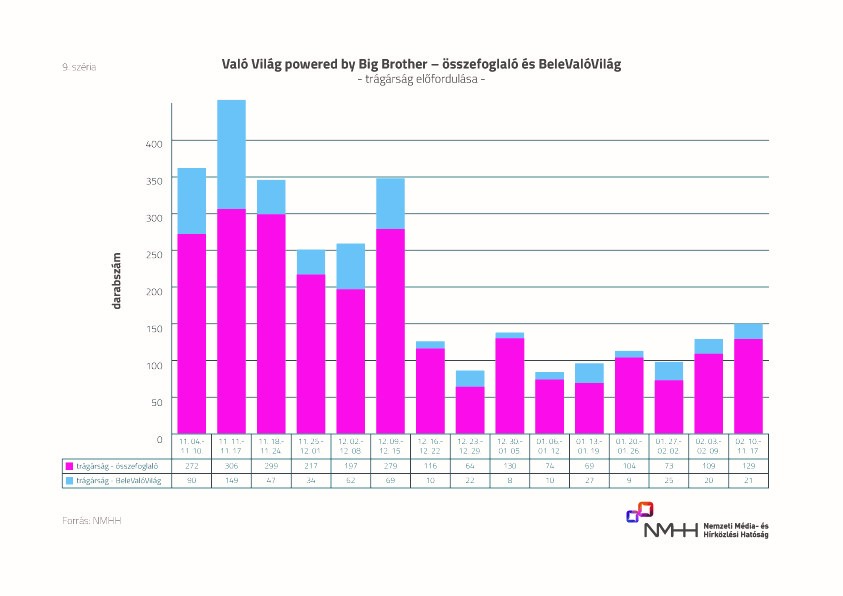 Alcohol consumption was not featured on screen for several weeks

The display of direct and indirect alcohol consumption was noticeably low throughout the entire season. In the recaps, the number of sequences featuring alcohol consumption was between zero and twelve, with the exception of the first week, whilst in the case of the late night show, there were no such scenes between 4 November and 5 January, nor between 26 January and 9 February. This trend shows a significant decrease compared to the figures of 2016, when there was a total of 361 instances of such depictions in the evening recaps, whilst two years later, this figure dropped to approximately one-fifth compared to its former rate (66 cases). In both seasons, the opening week featured the highest number of objectionable sequences: 56 in 2016 – nearly one in every five minutes – and only 15 in 2018, thus approximately one in every fifteen minutes.

The share of scenes suggesting drinking or displaying it in a favourable way was also minimal, with between zero and twenty instances in the recaps and between four and zero in the late night shows – the first week of the summary was an exception to this, with over forty instances. In 2016, 21 instances per week was the highest rate, yet every week featured sequences indicating alcohol consumption: the weekly average was 13.3 compared to the present rate of 9.1. 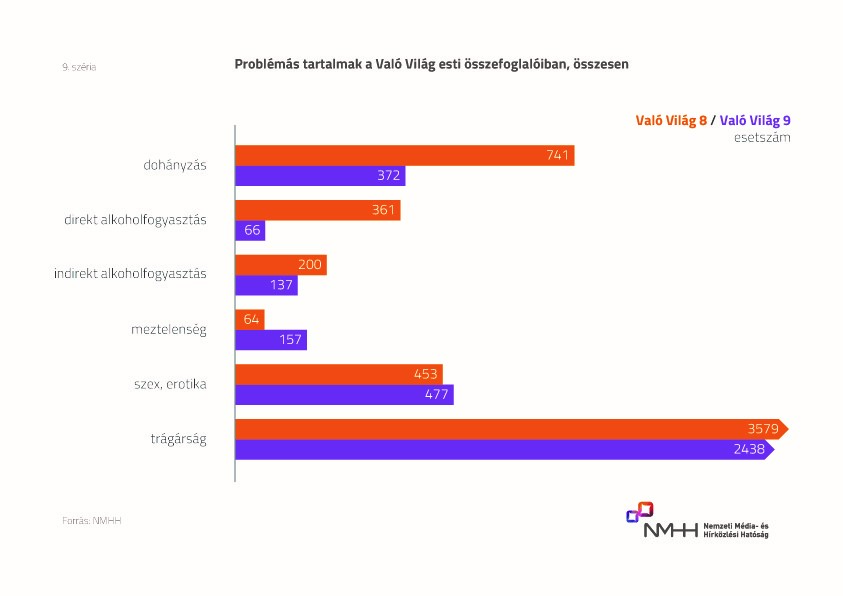 Although over time, the recently concluded series fortunately featured a decrease in objectionable content, their high number at the beginning of the series is still a cause for concern, particularly in light of the fact that viewers between 13 and 17 years of age are still at the top of the audience ratings of Season nine of Való Világ.

Methodology of the study

The barometer analyses the harmful motifs in the show using quantitative methods. The analysis counts harmful content per scene, while profane expressions on a per occasion basis, whilst the field of sexuality includes verbal references to sexuality. In the case of alcohol consumption, the barometer differentiates between direct and indirect forms: in the case of direct consumption, just like with smoking, the analysis counts the actual behaviour, whereas indirect cases include residents talking about their drinking experiences. The NMHH’s objective with the barometer is to raise awareness of the importance of conscious media consumption and the harmful effects of critical and harmful content beyond the limitations of law.