Hungarian society’s mistrust toward new technical and technological developments has already been demonstrated when smartphones started to take over: surveys conducted back then showed that there was an increased demand for smart devices that looked and felt exactly the same as old, traditional mobile phones. It is no different with smart cars as shown by the preliminary data from the NMHH’s research. Although smart cars, i.e. self-driving vehicles, allow you to sleep or work while en route and the technology is even able to look for a parking spot, these benefits notwithstanding, its future is beset with a number of legitimate or perceived fears and concerns.

The driving experience is lost

The implementation of intelligent transport system and the take-up of self-driving cars require interaction both between cars and the infrastructure and among cars. As this interaction has strong implications for communications and requires the harmonisation licensing of the frequencies used, the NMHH needs to be aware of the trends and predictions in this field.

Four out of the five most popular opinions about smart cars are negative, expressing some kind of fear or concern. Hungarians’ biggest complaint against smart cars is fundamentally that they are smart. The majority (two-thirds of the respondents) thinks that smart cars will no longer allow them to enjoy the freedom of driving as a robot will control the vehicle for them. One out of two respondents mentioned this, even including people who do not have a driving licence or plan to obtain one. Six out of ten respondents consider cars to be personal effects so much so that they want have their own and would not get a shared smart car from a pick-up point, even though thereby traffic, congestions and parking issues could be reduced, while also cutting air pollution and vehicle maintenance costs. A similarly high proportion of respondents said that although the technology is capable of avoiding traffic jams, urban traffic will not be reduced as even those who do not know how to drive will use cars. Finally, the opinion that these vehicles continuously collect data about transport, shopping and music listening patterns that may fall into the wrong hands is also at the top of the list. The five most important considerations included a single positive one, highlighted by six out of ten respondents, namely that self-driving cars offer a greater degree of freedom and independence to those who previously had to rely on the help of others or were not able to travel, such as elderly people or people with disabilities.

It might come as a surprise that seven out of ten young people and those having or planning to obtain a driving licence do not have more positive attitude toward smart cars than the rest of the respondents: in general, there were higher rates of both positive and more sceptical opinions. Overall, only one in three respondents considers it beneficial if driverless cars gain popularity within a few decades and only the minority considers this to be true, even among young people. Indeed, they are even more afraid of using such cars: only one in four respondents would use a self-driving car and only a third of young people, who are usually more open to innovations and experimenting with new things, would try it out. The rate of refusal is even higher among those who have no driving licence and do not plan to obtain one, even though shared smart cars would offer them a great travel alternative if they occasionally needed a car. 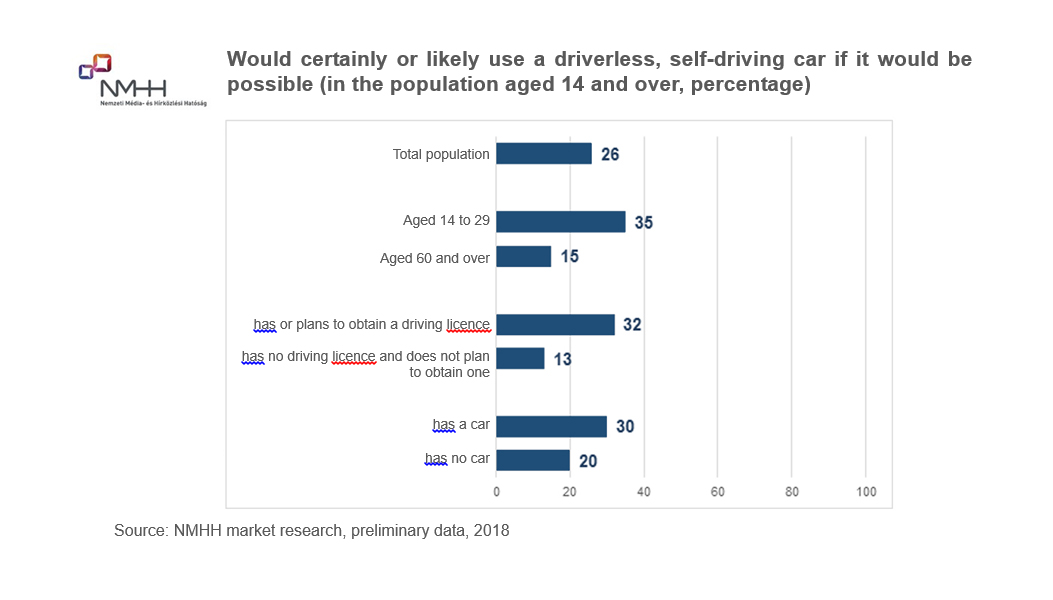 The most popular features

When presented with a list of twenty features of smart cars, the most popular among respondents were those features that many new car models already have at least partially or as an extra in some shape or form or there is a smartphone app for them. Thus, the most popular smart car feature is traffic information, mentioned by 42% of the respondents, collision avoidance (42%) and parking assistance (40%). Merely a small portion of the respondents considered it a great feature if self-driving cars automatically pay for parking. Only one in eight respondents mentioned the feature that may be the most important in a smart car and still seem like something out of sci-fi: self-driving.

Even with knowledge of smart features, only one in six respondents would be willing to pay more for a vehicle that has the features respondents considered the most important, yet only HUF 1,000,000 more on average.

For years, the NMHH has been conducting comprehensive national surveys on various subjects, the key findings and summaries of which are published on its website on a regular basis. The surveys are conducted to provide the authority with better insight into user habits and opinions and to enable the NMHH to provide reliable estimates of expected changes over time and of predictable market trends. The final results of the 2018 national survey on the residential use of services are expected to be published in the spring.