For years, the NMHH has been conducting comprehensive national surveys on various subjects, including the residential use of various telecommunications services (electronic communications services) each year, the key findings and summaries of which are published on its website on a regular basis. The surveys are conducted to provide the authority with better insight into user habits and opinions and to enable the NMHH to provide reliable estimates of expected changes over time and of predictable market trends. The final results of the 2018 national survey on the residential use of services are expected to be published in the spring, but the changes in user habits, opinions and types of potential problems brought about by the amended telecommunication regulations on fixed-term (loyalty) contracts in effect since the autumn of 2017 can already be inferred from the preliminary data.

For example, one of the changes of 2017, proposed by the NMHH, was that fixed-term subscriber contracts could only be concluded for a maximum of one year instead of the previous two-year period, unless a device purchase is connected to the contract, in which case the upper limit remains two years. The service provider always has to offer the option of an indefinite subscriber contract prior to the conclusion of a contract including loyalty, and inform the contracting party about the detailed terms and conditions. According to the legislative amendment, after the expiry of the loyalty period, the monthly fee of the new, indefinite contract and/or other terms of the service may not be more disadvantageous than those of the previous contract including loyalty, and the subscriber shall be entitled to terminate their indefinite contract with immediate effect and without any legal consequences anytime. Yet another important change is that service providers are required to unlock, at the request of customers and free of charge, any device purchased with a fixed-term contract at a discounted price, provided the subscriber contract has expired in the meantime, or the subscriber has paid the price of the device during porting within the loyalty period.

The NMHH survey has also concluded that customers usually do not regret having concluded fixed-term contracts with their service providers: roughly 90 per cent of the respondents said that it was a good decision even in retrospect. Two-thirds of those who entered into this type of contract in 2018 made use of the greater freedom provided by the new regulations, and committed only to one year of loyalty, unlike those who had entered into a contract including loyalty in 2017, before the new rules came into force: 90 per cent of these subscribers committed to two years of loyalty. 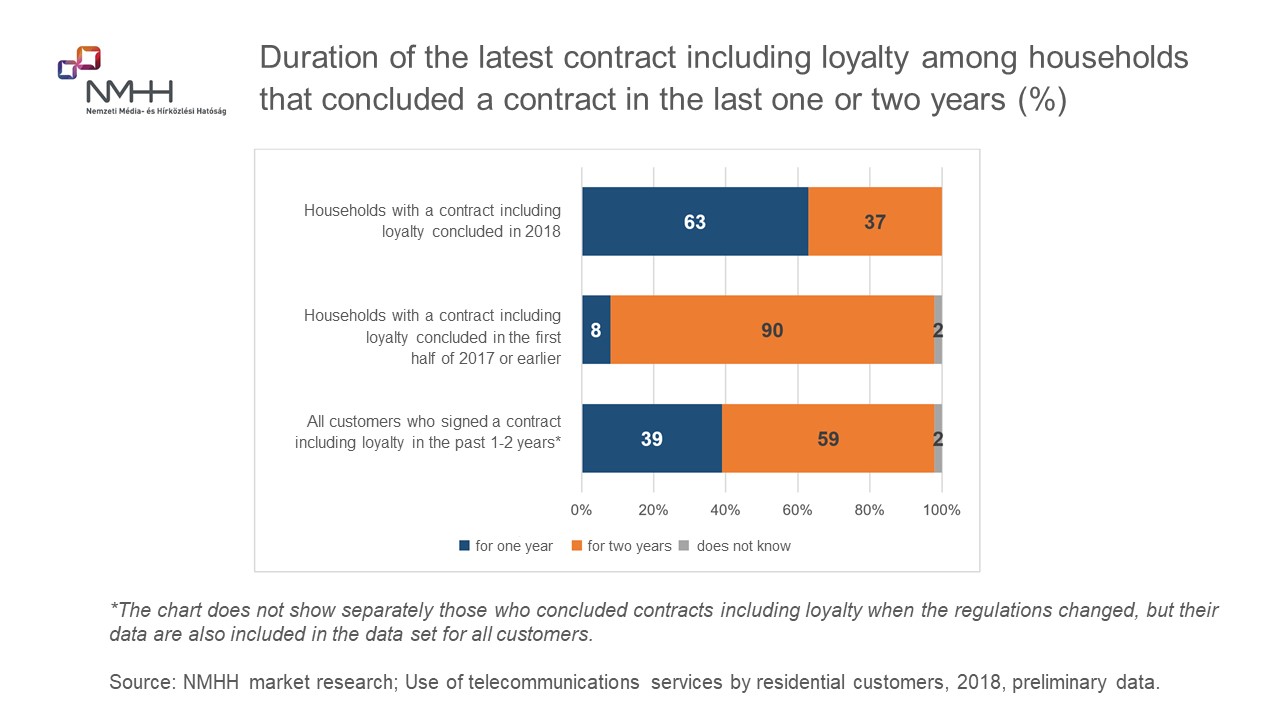 Nine out of ten respondents reported that they had never had any problem whatsoever with their contract including loyalty, nor had they suffered any disadvantage as a result. In 2017, one out of five families had at least one contract including loyalty that expired, but the overwhelming majority (79 per cent) signed a new fixed-term contract with the same service provider, and only 4 per cent switched to another service provider when the loyalty period expired. Of those who stayed with their service providers after their loyalty period had expired, only one in ten reported having received a higher bill for the same package. According to the survey, the main reason for committing to a loyalty period with a particular service provider was clearly the lower service price: two-thirds of the users considered this to be the most important aspect, followed by the reason named by one out of seven respondents, namely that there was no price increase during the loyalty period, which made family spending more predictable. 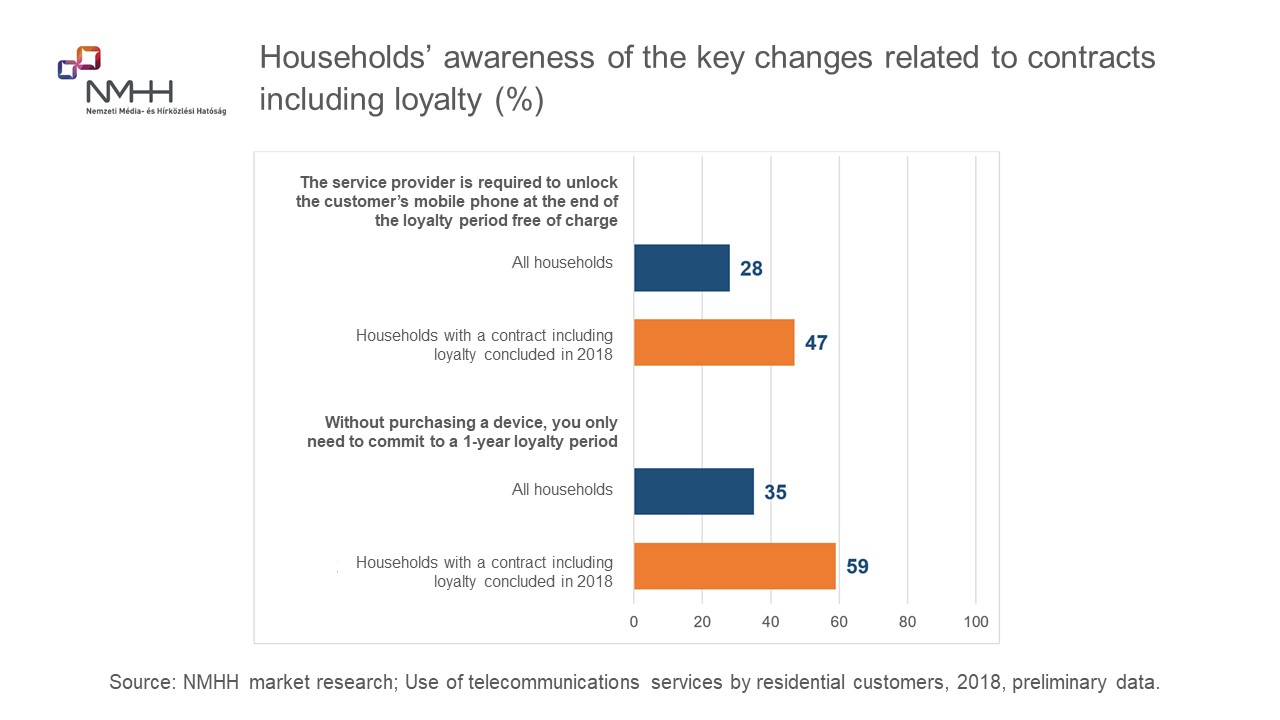 Nearly half of those who signed a contract including loyalty in 2018 had heard that when switching mobile service providers, the old service provider was required to unlock the device purchased from them upon the customer’s request. Six out of ten were aware that, unless they also purchased a device, they had to commit only to one year of loyalty instead of two.

Whenever the regulations change, and especially when complicated changes are involved, it is very important that the customer service representatives of service providers should inform users about their options proactively and comprehensively. Most respondents concluded their contracts including loyalty almost exclusively through customer service representatives: 68 per cent in person, 29 per cent over the phone, and only a fraction of them using the online interface. Seven of ten customers recently concluding a contract including loyalty responded that they had been informed by the service provider before concluding the contract as to how much they would have to pay if committing to a one- or two-year loyalty period, and how much with an indefinite contract.