The Media Council provided HUF 60.6 million worth of funds for the production of nine animation films and episodes of animation series in the first round of this year’s Macskássy Gyula Tender in the framework of the Hungarian Media Patronage Programme. Directed by Eszter Szoboszlay, Cigánymesék (Gypsy Tales) continues with the story of Zefír and Rebeka, while the latest episode of Cserebogarak (May Bugs), directed by Ervin B. Nagy will recount the first childhood successes of the Polgár girls after the stories of Krisztina Egerszegi and Rudolf Kárpáti. Líviusz Gyulai will make a new episode of the time-travel story Egy jenki Artúr király udvarában (A Connecticut Yankee in King Arthur’s Court). Szilárd Bálint will direct the second episode of Budapest Spaceport, a story set in a future spaceport, while Balázs Pál will continue the tale of the lovely and happy little cow in the animation series Lilly csodálatos világa (The Wonderful World of Lilly). Directed by Bálint Benkovits, the first episode in the new series Marci kertje (Marci’s Garden) will introduce both kids and grown-ups to the joys of gardening. Three standalone projects also received funding. In Attitűd (Attitude) directed by Szandra Pataki and Zsuzsanna Kemény) the protagonist to cope with his life falling apart, while things around him literally break apart and disappear. In Szökési sebesség (Escape Velocity) to be directed by Tamás Rebák, an astronaut will leave behind a distant, strange planet. Kinga Rófusz will tell a story about separation and building a new life in Otthon (Home). For the second round of the Tender, the deadline for the submission of synopses is 28th June.

Under the Escher Károly Tender for grants to support the immediate on-site filming of ad hoc events, the Council provided a grant of HUF 1.6 million for shooting scenes for dr. Cintia Garai’s film about illegal parrot trafficking in Indonesia. The grant will be used to shoot scenes of a unique piece of genetic research that will facilitate the identification of animal trafficking routes.

The Council decided to issue an invitation to tender with a budget of HUF 110 million for the technical improvement of community, so-called linear media service providers (traditional radio stations and TV channels broadcasting on the basis of a programme schedule) this year as well. The maximum amount of support available is HUF 5 million for TV channels, HUF 3 million for radio stations and HUF 1 million for small-community radios, but it may not exceed 80% of the planned total costs. The application deadline for the first round is 12th July and the minimum value for equipment purchase to be applied for is HUF 50,000.

After assessing a broadcasting week of commercial radios Aktív Rádió 93.8 in Karcag and Aktív Rádió 102.2 in Tiszakécske in the spring, the Media Council imposed a HUF 80,000 fine on their media service providers as although both radio stations should have broadcast their own programmes with predefined local content four hours a day, they used those time slots to broadcast the programming of Szolnok’s Aktív Rádió, a radio belonging to the same network. When imposing a fine, the Media Council always determines the form and extent of the penalties with due consideration to all the circumstances of the specific case and employing the principle of progressiveness and proportionality.

A study approved by the Media Council shows that news programmes did not exceed the statutory 20% limit for presenting crimes for purposes other than providing information to the public last year either. Since 2011, the NMHH have analysed the practices of media service providers required to comply with this limit every year using its programme database analysis software Iris and enlisting the help of its staff doing the programming. This year, the 2017 broadcasts of Duna TV’s Híradó (News), Kossuth Rádió’s Déli Krónika (Noon Chronicle), M1’s Esti Híradó (Evening News), RTL Klub’s Híradó (News) and TV2’s Tények (Facts) were analysed. Tények continues to feature the highest share of crime reports with 15.4%, this, however, represents a four percentage-point decrease compared to 19.8% in 2016. Tények is followed by RTL Klub’s Híradó with 14.9%; this share only saw a slight increase compared to the previous year’s 14.1%. The public were least likely to hear about this topic in Déli Krónika with a 0.8% share.

The Authority also assessed so-called “instant-impact” news reports that provoke emotions with little relevance to public life, including reports about domestic, traffic and work accidents and natural disasters in addition to crimes. Such news compilations made up 46.9% of Tények and 40.9% of RTL Klub’s Híradó, representing a decrease for both channels compared to 2016 (TV2: 52.6%, RTL Klub: 42.5%). Within accidents and disasters, traffic accidents topped the ranking, followed by catastrophes and disasters caused by extreme weather and domestic accidents.

In the programmes under review, reports about crimes for the purposes of providing information to the democratic public, such as about extortion and the housing mafia within crimes with a social motivation, attacks and crimes against ethnicities as well as crimes against public officials, are not covered by the 20% limit; the share of this category has significantly dropped for commercial channels compared to 2016 (TV2: 12.1% vs. 7.3%, RTL Klub: 10.7% vs. 7.2%). Commercial media service providers most frequently reported on crimes involving civil servants or persons holding public office, while public-service channels featured terrorist acts dominantly. The full study is available on the NMHH website. 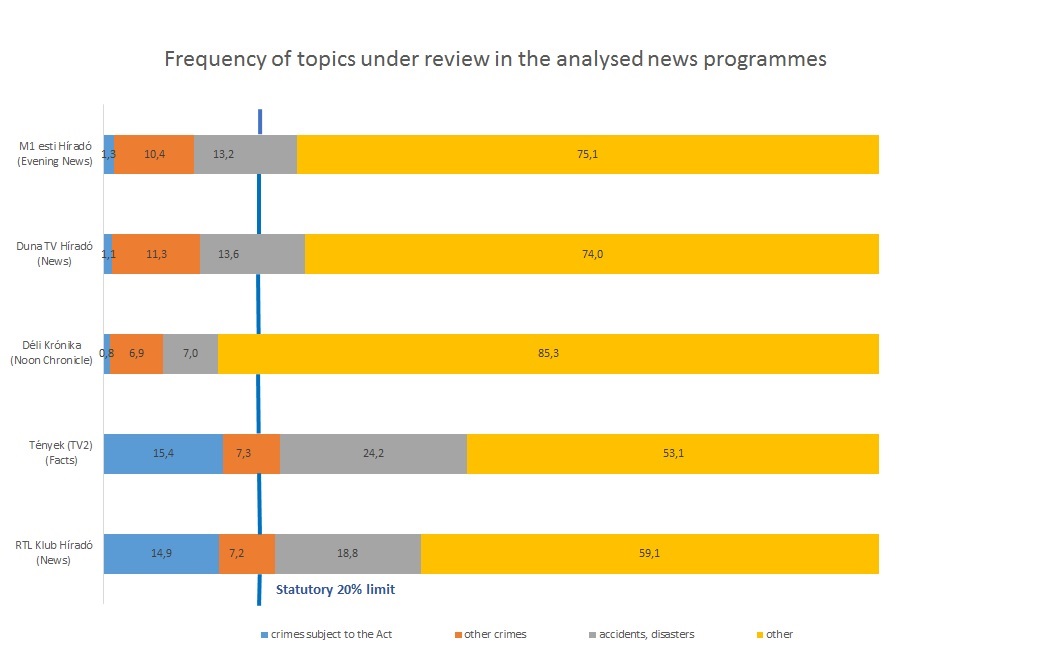