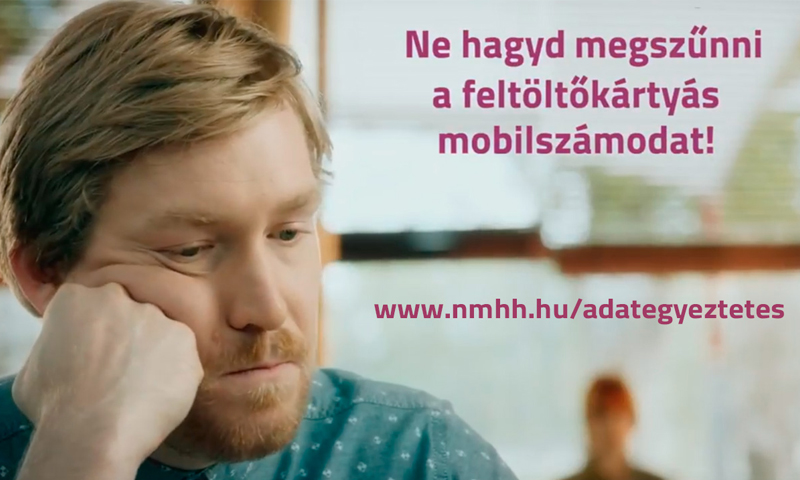 Reconciliation of prepaid SIM cards: you can still avoid the crowds at the customer service centres if you take action as soon as possible and, preferably, online

There are only 30 days left for prepaid customers who purchased their SIM cards prior to 2017 and have not yet reconciled their personal details with their operators. Those who fail to comply with this obligation by 30 June will have their subscriptions terminated. The operators affected, i.e. Telekom, Telenor and Vodafone, are tasked with data reconciliation; however, NMHH’s records indicated that approximately two-thirds of the SIM card owners involved have not yet complied with this regulatory requirement. This deadline should be particularly remembered by families planning to go on vacation after the end of the school-year to avoid their subscriptions being terminated during their holidays.

In order to avoid the likely crowds, NMHH is hereby requesting prepaid SIM card owners to initiate the administrative proceeding themselves, not to wait until the last days of June and to opt for online data reconciliation whenever possible. The whole procedure takes only a few minutes, during which the personal identity and the validity of the ID card, driver’s licence or password of the person in the contract are verified. Two operators offer an online option and all three support reconciliation over the phone or in person at the customer service centres. The key to online data reconciliation is to submit accurate data because any typo may invalidate the procedure. Those opting for the online method are rewarded both by Telekom and Telenor with free voice call minutes or data traffic discounts (Telekom: free calls within the operator’s network over an entire weekend, Telenor: 20 minutes of free voice call and 500 MB of data traffic). Vodafone is also working on its online website and currently accepts email subscriptions to notifications about the activation of the online interface. Visit www.nmhh.hu/adategyeztetes for more information about the data reconciliation of the specific operators.

NMHH has launched a campaign to inform consumers and provides ongoing monitoring and interpretation of the law to support the affected operators in data reconciliation of pre-paid SIM cards.   So far the authority has had to warn two operators about incorrect data reconciliation and demand compliance with the regulations. After the 30 June deadline, NMHH will evaluate the business practice of each operator in full.

NMHH and Invitel agreed on a HUF 127.3 million compensation for subscribers

In the regulatory contract concluded by NMHH and Invitel on 31 May, the operator agreed to credit a total of HUF 127.3 million to the accounts of those customers using landline telephones who already used that service in 2015, are currently Invitel customers and for whom Invitel unlawfully increased rates. The contract is now closing the regulatory supervisory proceeding that NMHH began this January based on the mandatory data reporting of the company for 2015, and during which proceeding the company was very compliant. As a provider with significant market power, Invitel could not have applied landline subscription rates higher than the inflation rate in 2015 without providing a reason; yet the company, compared to the 0% consumer price index published by the Hungarian Central Statistical Office, increased its rates by 1.38 percentage points that year. Based on the agreement between Invitel and NMHH, the operator will repay the extra revenue thereby realised to the affected subscribers. The company will credit half the amount to the July and the other half to the August bills of the affected customers. Subscribers will also receive a separate notice about the compensation estimated to be close to HUF 1,000 per account. NMHH and the operator also agreed that subscription rates for landline telephones may only be increased as predefined in the contract, i.e. this year’s consumer price index minus 1.38 percentage point.

Due to suspicion of endangering free market competition, NMHH has imposed a temporary ban on the use and service provisioning of Magyar Telekom’s Flip Otthon package

Until the regulatory proceeding becomes final, but for no more than 90 days, the resolution of National Media and Infocommunications Authority (NMHH) dated 26 May bans the conclusion and provisioning of Magyar Telekom’s Flip Otthon tariff package to prevent any competitive advantage unlawfully obtained by the operator. The suspensory measure was needed because if it is proven that the operator did commit an infringement, later it would be impossible or extremely difficult to reverse the competitive edge obtained by Telekom with the contracts concluded during the period of the regulatory proceeding. The operator has implemented the provisions under the temporary regulatory measure, suspended marketing of the Flip Otthon tariff package; however, at the same time, the operator launched its Flip Otthon+ package, the regulatory compliance of which will also be investigated by NMHH.

Based on the infocommunications act and EU laws, Telekom, as a provider with significant market power, many not conduct a market practice that is suitable for restricting competition. Consequently, if such an operator intends to increase its offering with a new tariff package that is significantly different from the existing ones, the operator is required to offer the planned service to operators with no network in the specific area at least 30 days before the service is launched and at the wholesale price approved in advance. Thus, those other operators can also compete with Telekom’s service and subscribers’ interests would not be injured due to lack of competition. NMHH is currently investigating whether Telekom has complied with this obligation with regards to the Flip Otthon tariff package.