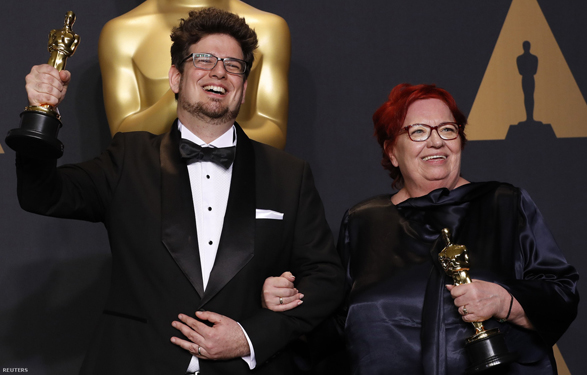 Only one year has passed and this country is once more celebrating an Oscar winning Hungarian film. This is a huge success shared by Sing’s director Kristóf Deák and its producer, Anna Udvardy, as well as all members of the crew and cast contributing to the film, President of the NMHH Media Council Monika Karas told Hungarian News Agency MTI.

The President emphasized that this achievement was unparalleled: Sing is the first Hungarian short film to win this category at one of the most prestigious award ceremonies in the world of film. The creators as well as the whole of Hungary can be proud of this extraordinary result. Which is why we are very happy that this film was produced with financing from the Hungarian Media Patronage Programme of the Media Council: it received eight million forints state contribution under the Zoltán Huszárik tender. She also noted that, in addition to last year’s Oscar awardee Son of Saul and winner of this year’s Golden Bear award On Body and Soul, Kristóf Deák’s Academy Award now serves as a convincing vindication of the Hungarian film subsidy regime, confirming that the stated objectives are good and that, as a result, more and more talented Hungarian filmmakers are able to bring their plans to life, augment our cultural treasure trove and, furthermore, earn international awards for the same. The award has also shown, she said, that the world was receptive to beauty, to positive messages and to expressions of mutual sensitivity as well as of collaboration.

As President of the Media Council Monika Karas expressed her heartfelt congratulations on behalf of the members as well to the creators of Sing, the protagonists and all the child actors, and wished all the participants in making this film future inspiration and further successes.

Under its film patronage programme, the NMHH Media Council spent over one and a half billion forints in just 2016 on supporting documentaries, popular science films, animated works, television films, featurettes, radio plays and films distributed online. The festival triumph and prestigious accolades like the Oscar nomination signal the fact that the Media Council is providing genuine support to Hungarian filmmakers, who can successfully represent Hungarian film on the international scene as well.

As the National Film Fund did with movies, the Media Council has set the goal in the television film genre to open the way for as many talented filmmakers as possible to bring to life their creative plans. Thanks to the dedication of Hungarian filmmakers, this aspiration is now bearing fruit.

The film is available to view until 5 March on MTV’s Médiaklikk webpage: http://www.mediaklikk.hu/2017/02/18/mindenki/ .

Over the past six years, the Media Council of the National Media and Infocommunications Authority has invested upwards of HUF 16 billion in the production of media content:

The 11 tender categories of the patronage programme: