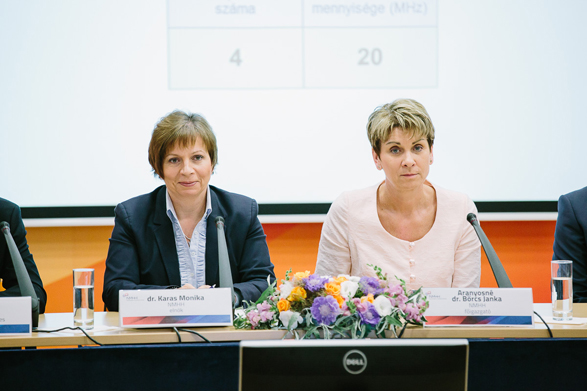 At the announcement of the results Dr. Monika Karas, President of the National Media and Infocommunications Authority, emphasised that it is particularly important for NMHH to give new momentum with the sale of the frequencies to the expansion of the wireless broadband services' coverage and capacity, and thereby encourage competition in the mobile market to provide all citizens with equal opportunities to access infocommunication assets. Furthermore, she emphasised in her speech that in our days the development of all other industries is unfeasible without the development of infocommunication. Accordingly, it is a legitimate expectation toward the authority to manage the frequencies, i.e. the core infrastructure of infocommunication in the 21st century – available in limited volume – in a responsible manner.

Dr. Janka Aranyosné Börcs, Director-General of the National Media and Infocommunications Authority, emphasised that the awarded frequencies are for free usage, the authority prescribes for the winners only that they indeed must take them into use rather than the way of using them. To this end the winners must apply for the radio licence within two years and start using the blocks within four years. The authority started the sale of the band after consultations with the infocommunication service providers treated as strategic partners and processing the comments received; the sale of the band is the last phase of the implementation of the NMHH's 2012-2015 radio spectrum strategy – she said.

Details of the auction

The frequency band is suitable for providing broadband mobile services requiring high-speed, high-density data transfer and for installing wireless backhaul links to create links between individual access points and user systems. It also provides an opportunity to install fixed access networks. The NMHH ensures the continuity of the frequency usage within the framework of limited capacity management and provides the frequencies necessary for the newly arising market needs. In the lower half of the 3400-3800 MHz band (3400-3600 MHz) announced for sale the frequency usage rights won in 2001 for 15 years will expire at the end of June this year, hence it was timely to announce the sale of the lower part of the band. The upper part of the band (3600-3800 MHz) is opened for the interested parties for the first time.

Two bids were received in response to the auction procedure announced on 11 April 2016 and both bids complied with the formal and content requirements. Based on the evaluation of the content, in the 3400-3600 MHz, so-called FDD band Vodafone Magyarország Zrt. acquired the utilisation right of 2x30 MHz – 6 basic blocks – for HUF 648.6 million, while in the 3600-3800 MHz, so-called TDD frequency band, DIGI Távközlési és Szolgáltató Kft. paid almost HUF 248 million for the frequency usage rights of 4 basic blocks, i.e. 20 MHz. With a view to ensure efficient frequency management, in the course of the frequency allocation the authority will position the FDD blocks won by Vodafone in the 3400-3600 MHz band in the lower part of the band, while it will determine DIGI's user blocks in the 3600-3800 MHz band starting from upper bound of the band going downward in the frequency. Thus the remaining parts of the band, not allocated to users, can form the largest possible contiguous frequency block and will be suitable for a future, potential joint TDD sale, as demands for blocks in this band may arise later on as well.

Winning bidders will be entitled to use the frequencies until 2034.

Plans of the service providers 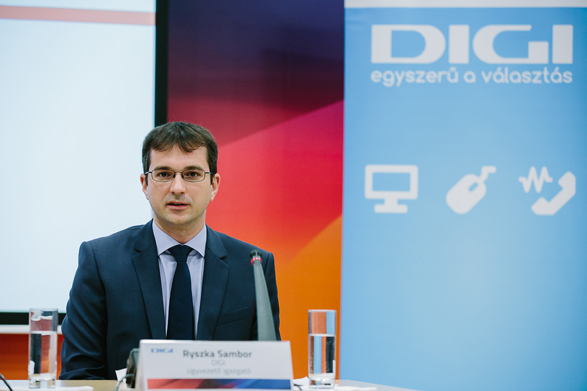 At the press conference Ryszka Sambor, executive director, representing DIGI Távközlési és Szolgáltató Kft, said that "the acquired frequencies will help DIGI develop a mobile network of higher quality and capacity, suitable for providing voice and data transmission services". DIGI's mobile network is under development at present as well: while the preparatory works for the development and the broadcast planning of the network were performed in 2015, this year already the base stations are being constructed to ensure the launch of the services as soon as possible. DIGI hopes that it will be able to repeat its success achieved in the Hungarian cable telecommunication market in the mobile market as well, with outstanding quality built on state-of-the-art technology and user-friendly pricing. "The development of DIGI in the domestic telecommunication market is well reflected by the fact that only in 2015 it increased the number of its customers by fifty-thousand and achieved a 24% share in the television services market" – said Ryszka Sambor. 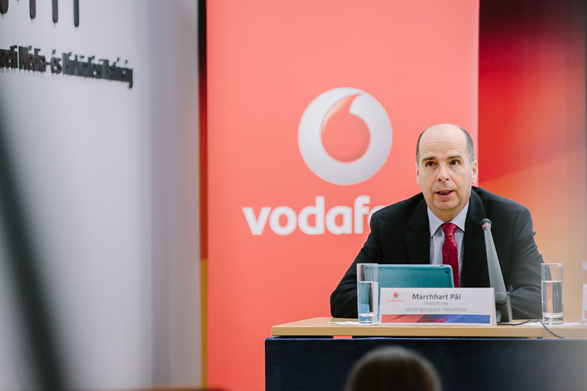 Pál Marchhart, Director of External Affairs of Vodafone Magyarország Zrt, said that as a result of the 2x30MHz frequency band just acquired, Vodafone can start the preparations in Hungary as well for the technologies providing faster than ever mobile services. With the new frequency set, won for 18 years, Vodafone has now the largest set of spectrum in Hungary, said the Director, adding that this may open the way in the foreseeable future for the introduction of new, innovative services and for serving household and business customers even more flexibly than now, among others, for strengthening the business landline services. 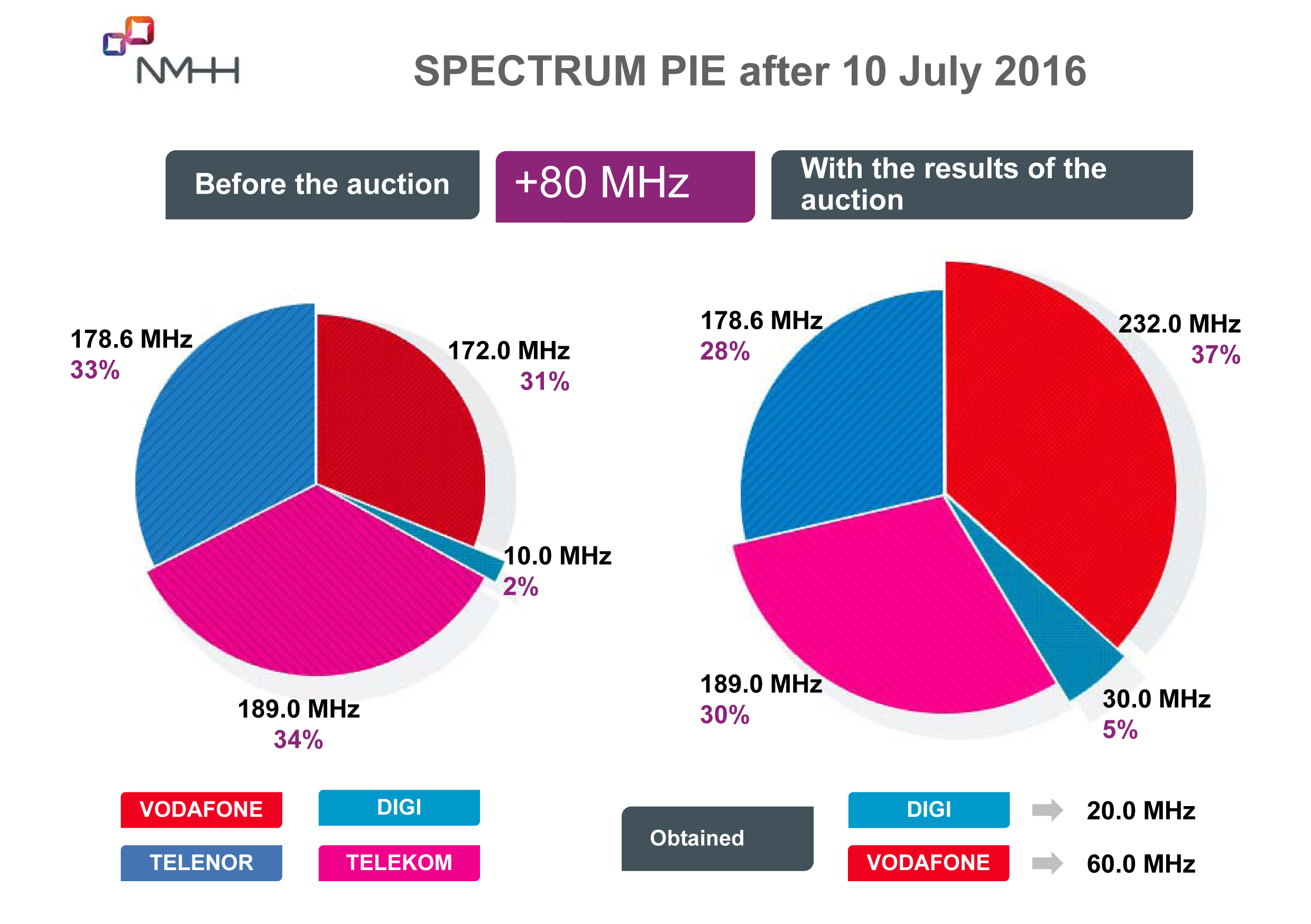 It was in autumn 2014 when the authority provided the mobile service providers with the long-term use of the 800, 900, 1800 and 2600 MHz frequency bands, with a view to accelerate the building of the broadband networks, the development of the Hungarian digital economy and to boost economic competition by selling the so far unused broadband-capable frequencies. Demands for broadband services have been increasing ever since, thus the lease of the frequency bands supporting such services bears utmost importance for the public. Then, in addition to the new entrant DIGI Kft, all three service providers won frequencies.

The objective of the NMHH is to ensure that the service providers use the acquired frequencies as intensively as possible and to the benefit of the society by providing services through them to the clients' advantage. The obligation to use the acquired frequencies and the dynamic sales of the frequency make the market transparent and encourage the dynamic development thereof, as well as the diversity of the services.