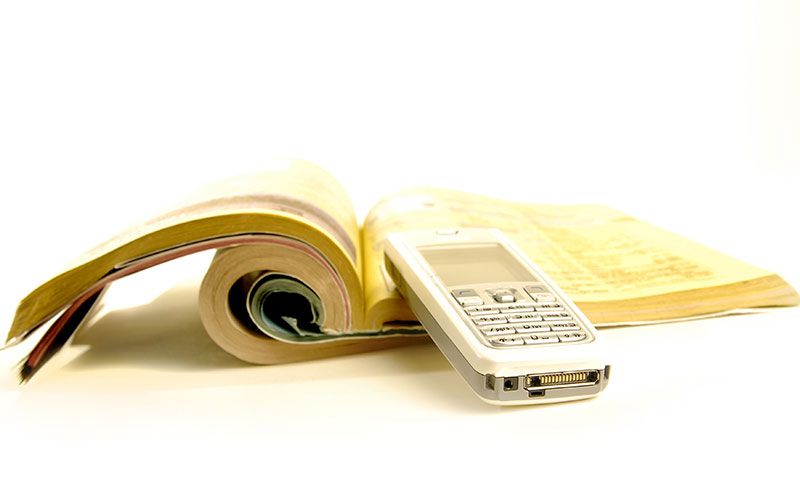 The age of telephone directories is over

At the end of 2021, Psyma Hungary Piac- és Közvélemény-kutató Kft. conducted a survey at the request of NMHH about the media coverage of residents in the countryside, and the consumption of local newspapers, news portals, radio and television channels. Győr, Sopron, Székesfehérvár and Dunaújváros were examined in this section of the multipart survey series.

People are more interested in country and global affairs

Hardly anyone watches local TV channels on a daily basis, even fewer people on a weekly basis. If we compare the viewing figures of such television channels with the aggregate viewing data of national TV channels (e.g. RTL Klub, TV2), there are differences of magnitude in the daily, weekly and aggregate results. While almost 90% of people in all four towns watch national television channels, much fewer people watch local TV channels. In most towns the share of people watching local TV channels is half that of viewers of national channels. In the examined towns much more people listen to local radios than those watching local televisions. (This goes against national trends, where televisions precede radios.) From the examined media types, considering the printed press, local newspapers are stronger compared to nationally distributed newspapers. If we compare the data about local press with the aggregate readership of national daily newspapers, the local press is in the lead in all four towns.

Local portals are accessed on a weekly, rather than a daily basis. On a weekly basis, internet news portals have the greatest reach from among local media outlets, as opposed to local televisions, radios and newspapers. However, on a daily basis, local websites cannot keep up the pace with national ones.

The results of the survey clearly show that at a local level traditional media outlets are on the decline. In the examined towns the ratio of people accessing information on the internet is between 52% and 60%, and between 15% and 21 % for the people who prefer to use traditional press for that purpose. The rise of new media is a general, national phenomenon, which is the strongest in generations below X.

The research data show, that readership figures of the printed press are dropping, but this does not mean, that the audiences reached by the newspapers are also shrinking. The majority of readers only switched platforms, and most of them follow such content online. When consuming local news, the use of local internet portals is exceptionally high in all four towns. Just over 60 % of news consumers find out about local events primarily through this new media. The preference for the online format is particularly striking in the case of the Kisalföld newspaper. While almost half of the local residents access the online version of the newspaper (Győr: 53%, Sopron: 47%), the printed version is read by only around a third of the population Győr: 36%, Sopron 27%). However, the online versions of county daily newspapers – in themselves – significantly increase the access indicators of the (printed) press. Especially in Western Transdanubia where the new indicator elevates this segment to the second position. While in Győr the aggregate access indicator of local printed press is 50%, by including the online version of Kisalföld this figure climbs to 73%. In Sopron the basic indicator of 47% increases to 64%.

The Council established that RTL Klub broadcast the public service advertisement entitled A család az család [Family is family] in the wrong time slots in December 2020 which was unlawful. Irrespective of the fat that such advertisements need not be assigned an age-rating, they can only be broadcast, when their broadcast is compliant with the classification rules, provided they are categorised based on their content. As it is difficult for children to understand the topic of same-sex couples raising children and discussing them together with the notion of family in the adverts, they could only be broadcast between 9:00 pm and 5:00 am, while the channel aired them between 6:00 am and 8:00 pm.

A civil organisation lodged a complaint with the authority regarding an interview published on the Vasárnap.hu and Mandiner.hu websites. In the discussion, a Catholic parish priest expressed his views on people who are members of sexual minorities, who consciously embrace their identity and are LGBTQ lobbyists.

The authority's investigation found that the parish priest had strongly criticised the activists propagating the LGBTQ ideology in line with the official position and teaching of the Catholic Church, but his statement was neither exclusionary, nor hateful. The panel established that criticism by a parish priest constitutes political opinion, and thus such utterances are among the ones to be most protected by the freedom of expression, and that the right to freedom of expression extends to expressions contrary to the spirit and ideas of certain communities. As a result, the body did not open a proceeding against the service provider.

At this week’s meeting the Media Council adopted decisions regarding community and local media service providers too. You can read more about this on the authority’s website.

The full  agenda of the weekly meetings of the Media Council is available on the council’s website together with the minutes of the sessions and all the resolutions – the latest documents are published after the necessary certification and administration processes.