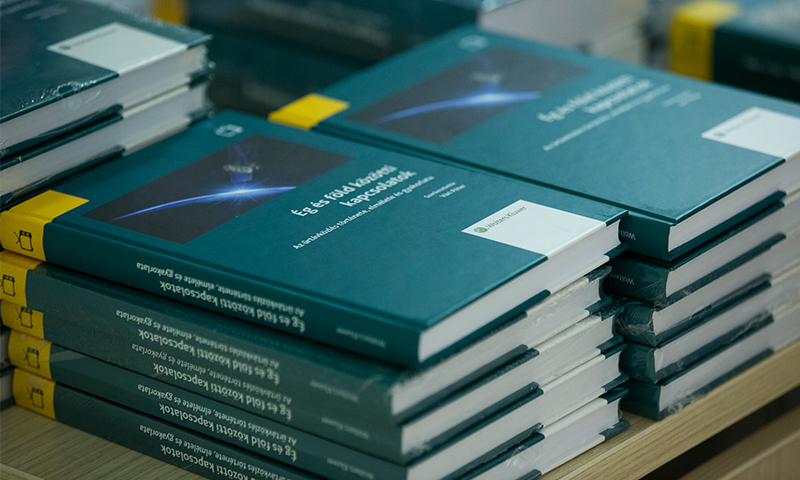 For the seventh time, the Budapest University of Technology and Economics organised the H-SPACE conference on the latest developments in space exploration, space technology and education of these. The Federated Innovation and Knowledge Centre (EIT) of the University's Faculty of Electrical Engineering and Informatics (VIK), together with the Hungarian Astronautical Society (MANT), organised the two-day event on 7 and 8 April. Dr. Orsolya Ferencz, Ministerial Commissioner for Space Research and Space Activities of the Ministry of Foreign Affairs and Trade, welcomed the guests and Zoom participants in the large lecture hall on the ground floor of building I of the Budapest University of Technology and Economics. In her short speech she welcomed the conference and said that space industry and space research are important for the Hungarian state. 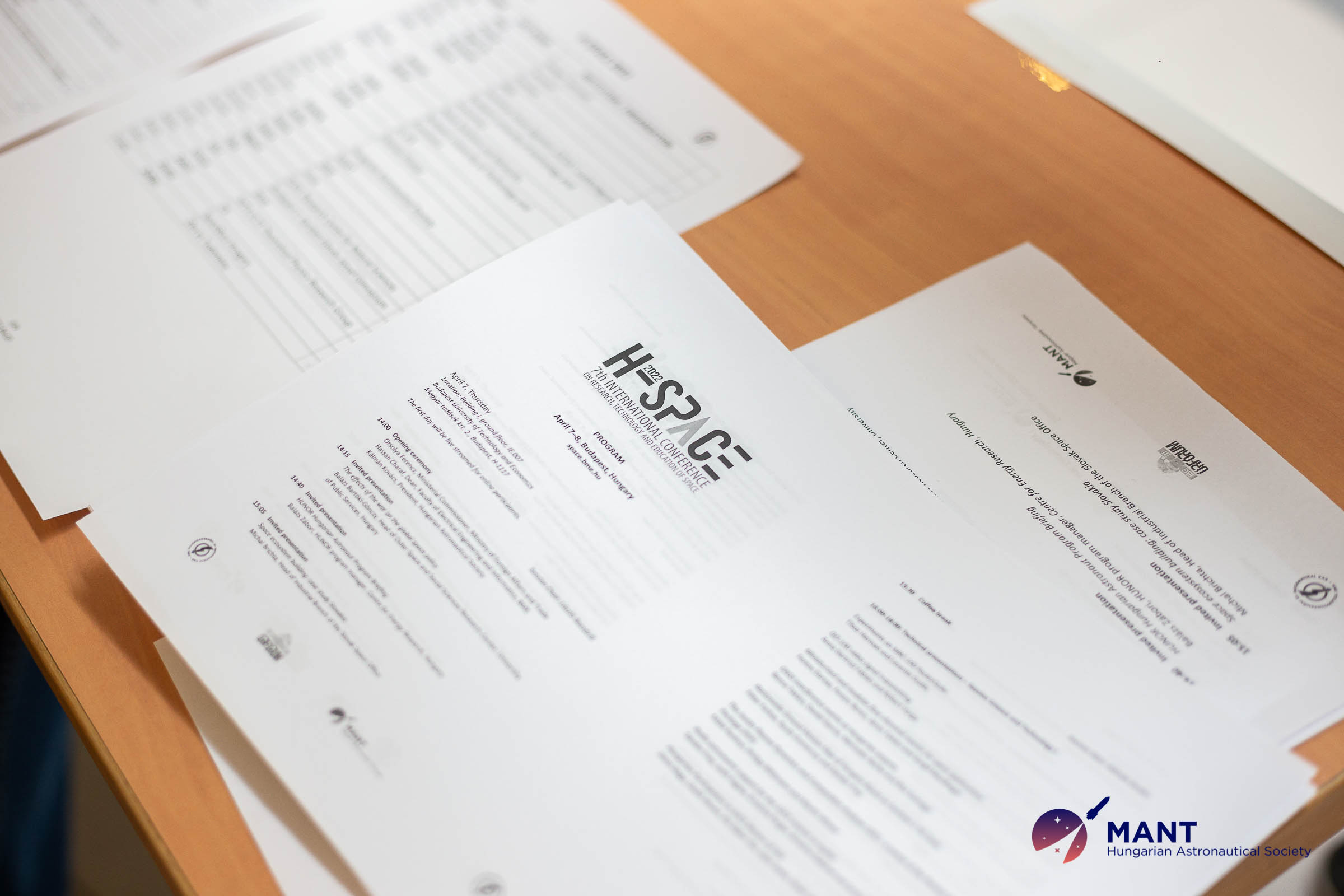 The programme leaflet of the H-SPACE 2022 Conference

This is also demonstrated by the fact that since 2018 the Hungarian space sector has been under the Ministry of Foreign Affairs and Trade. Thanks to the extensive coordination work carried out by the Ministry of Foreign Affairs, our international space industry relations with the European Union, the European Space Agency (ESA) and the V4 countries have been strengthened. Outside Europe, we have also concluded a number of bilateral cooperation agreements, from Singapore to Israel and Egypt. Funding and communication in the sector have increased. In recent months, the Hungarian state has signed a consortium agreement with seventeen Hungarian universities for postgraduate programmes in the field of space exploration. The Government is committed to increasing the Hungarian innovation capacity in the space industry, and is counting on Hungarian scientists and researchers to boost the sector, Orsolya Ferencz concluded her speech. 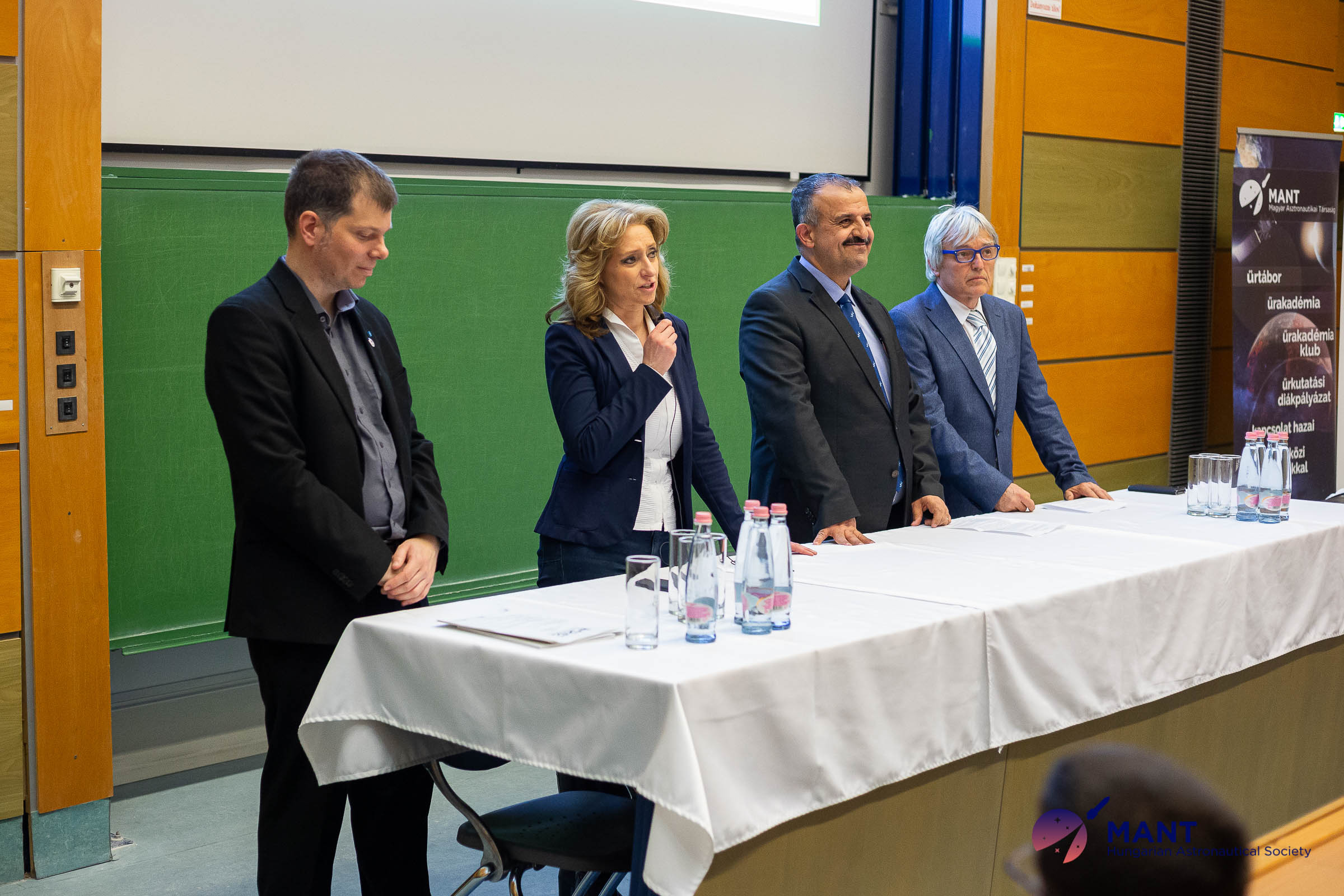 The Budapest University of Technology and Economics, which is hosting the conference, is the first institution in Hungary to launch a master's degree programme in aerospace engineering – Charaf Hassan, Dean of the Faculty of Electrical Engineering and Informatics of the university, took the floor. The aerospace engineering master’s degree programme, launched last year, is clearly in high demand, with over hundred applicants when it was first announced. This is not unrelated to the university’s fifteen years of experience in space technology workshops, during which time it has been involved in the construction and launch of four Hungarian satellites, and is currently working on a fifth. Launched in 2019, SMOG-P is also a world first in its class: the world's first operational "PocketQube" (5x5x5cm) sized satellite – and as such, the smallest operational satellite.

Balázs Bartóki-Gönczy: the war has spread to space

As he noted, the war has had a negative impact on the space industry and has also hampered scientific cooperation, as well as further exacerbating the possibility of armed conflict in space, said Balázs Bartóki-Gönczy, Head of the Space Law and Policy Research Workshop at the University of Public Service and member of the Media Council of the Media Authority, who analysed the impact of the war on global space policy. As for Ukraine's space industry, its advanced rocket and spacecraft manufacturing capacities, which employ 16 000 people, have not yet been destroyed, but could be strategic targets. The Russian space industry has been severely set back by the export ban sanctions, and the Soyuz rocket has been left without an external customer. The failure of the latter caused the postponement of 16 launches and a shortage of rocket capacity. Space X seems to fill this gap until the European developments (Ariane-6, Vega-C) are completed.

As far as scientific cooperation is concerned, the greatest uncertainty surrounds the fate of the International Space Station. The Russians are demanding that Western countries withdraw sanctions against two Russian companies involved in the operation of the ISS, threatening to withdraw from the project, causing the destruction of the ISS. The response from Canada, the US and Europe has not been reassuring, so Roscosmos will soon announce the consequences. And ESA's Russian Mars expedition, along with several other scientific programmes, has been cancelled. 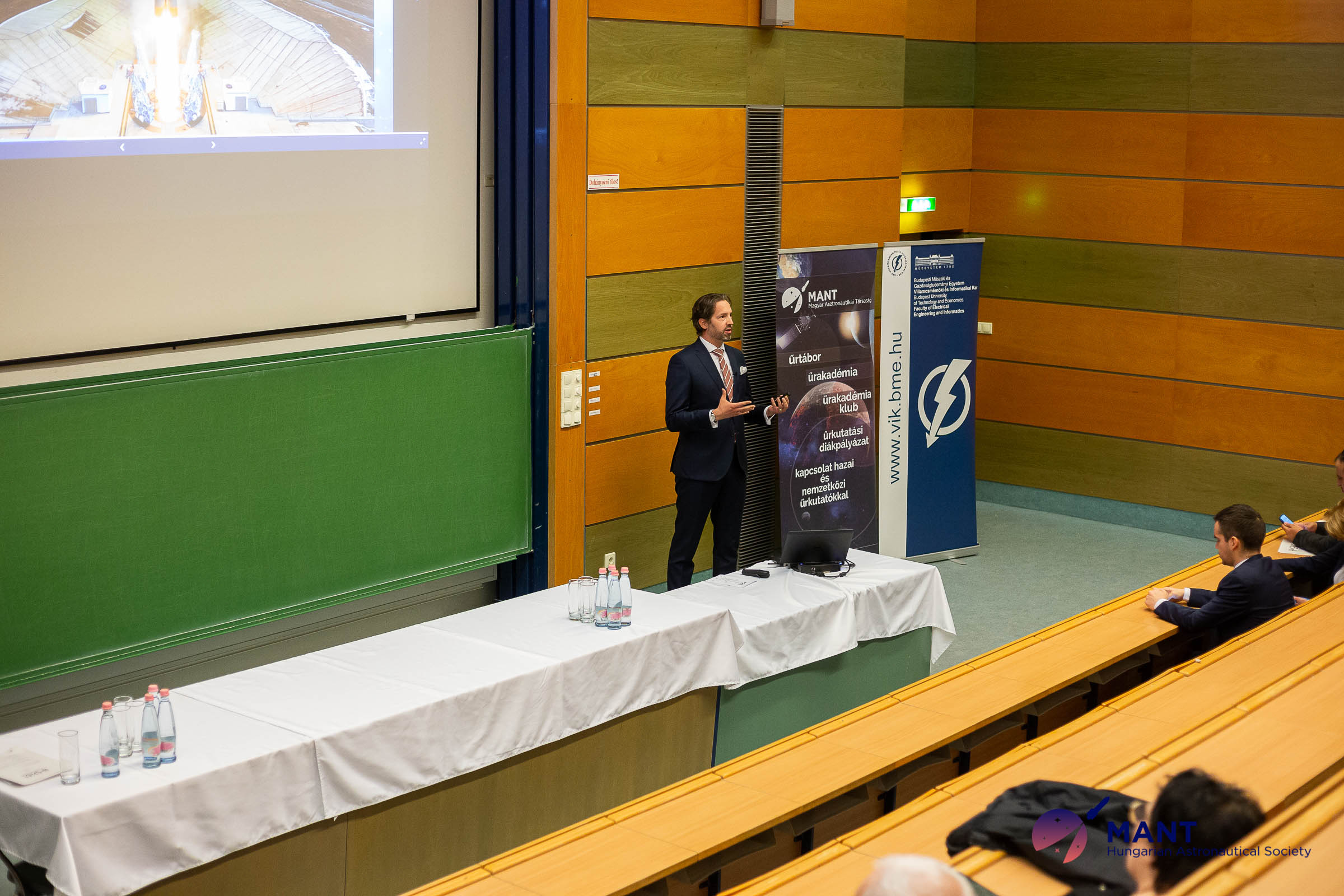 Balázs Bartóki-Gönczy, Head of the Space Law and Policy Research Workshop of the University of Public Service and member of the Media Council of the Media Authority, gives a presentation at the H-SPACE 2022 conference.

Balázs Bartóki-Gönczy also drew attention to the role of private market actors intervening in the war, highlighting the role of Space X, Maxar and Anonymus. As for the escalation of war in space, he pointed out that the UN has already called for a halt to the arms race in space in 2019, and NATO has declared space a theatre of operations since 2019. The Atlantic Alliance adopted its space strategy in January this year, and the European Union announced a few days ago a coordinated development of the defence industry, including space industry. This is a big change from the mainly civilian use of the past.

Hunor programme: the selection of the next Hungarian astronauts is under way

In the new space era, the Hungarian space industry must also show its capabilities and actively participate. This is also paved by the ongoing Hunor Hungarian Astronaut Programme, which trains future Hungarian astronauts who will serve on missions at the International Space Station. The programme was presented by Balázs Zábori, Programme Manager of the Hunor Hungarian Astronaut Programme. His presentation showed that the application phase for the programme closed in February. From the 244 applicants, 100 ‘finalists’ were selected, from whom two will be selected by Christmas this year at the latest, and two more reserve candidates by further tests. They will take part in at least one year of training, which will culminate in the dedicated training of the International Space Station.

In the last plenary presentation of the day, Michal Brichta, Head of the Industrial Department of the Slovak Space Agency, summarised the current situation and prospects of the Slovak space industry, followed by the afternoon sessions on science and technology. 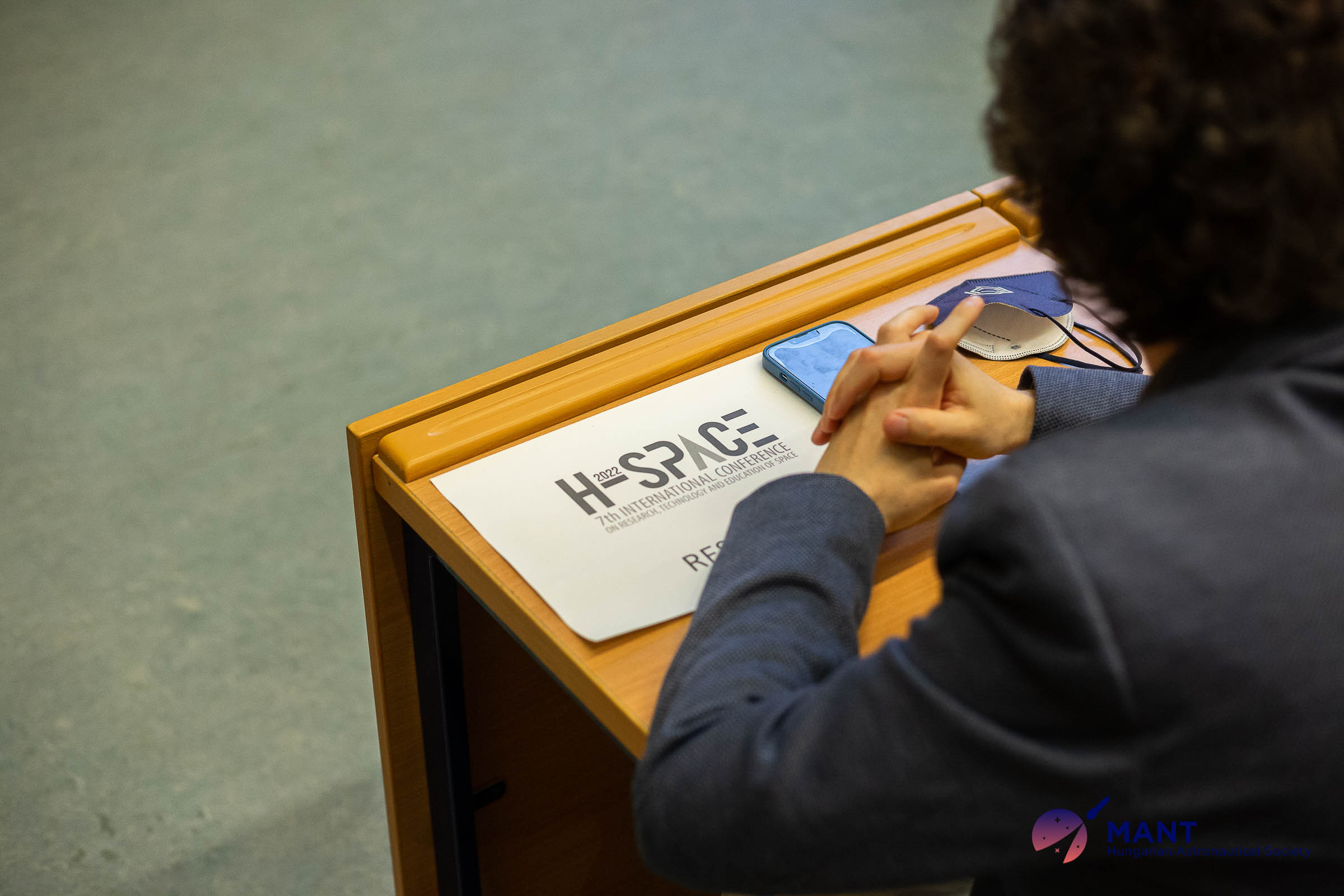 A participant of the H-SPACE 2022 Conference

Anna Gertrúd Fábián from the Department of Frequency and Identification Management and her fellow student Róbert Varga (both members of the SZESAT department of Széchenyi István University) gave a presentation entitled QO-100 video signal transmission. In it, the data transmission experiment related to the Qatar Oscar-100 (QO-100) geostationary amateur radio satellite and DATV were presented.  The devices, software and their interconnections needed to transmit the video signal, as well as the implemented station, were illustrated with diagrams and photographs. In their presentation, they talked about the problems and challenges of implementation and confirmed their intention to continue amateur television, DATV.

The presentation on the miniaturised flow chemical reactor developed for space applications presented the complex system capable of producing oxygen and other materials essential for future missions to the Moon and Mars, and the results of Hungarian research. In the field of Earth observation, presentations were given on GNSS (Global Navigation Satellite System) interference at Hungarian airports, maps based on Sentinel-1 data, but also on the measurement of plasma velocity on Jupiter's moons, and a presentation on the Hungarian participation in the ESA mission on Jupiter's icy moons (JUICE).

The scientific and technical sessions continued on the second day of the conference with a number of interesting topics. Topics included precipitation-zone monitoring based on GPS signal attenuation, the use of artificial intelligence in space communications, and ion thrusters for small satellites. Among the topics of the conference were the radio spectrum monitoring device to be placed on the MRC-100 satellite, the satellite radar interferometry flow analysis in the Carpathians in the framework of an international project, and the application of quantum algorithms in the processing of earth observation data. The presentations on the psychological impact of space exploration also gave insights into the analysis of video diaries of researchers working in the Antarctic winter and the content of communication, and the session was concluded with a presentation on changes in cognitive abilities in space analogue environment.

A snaphot from the H-SPACE 2022 Conference

The last session of the conference, a series of lectures on space education and popular science was no less interesting: among the invited speakers, Bianka Parragh (University of Public Service) informed about the UniSpace consortium, a consortium of 16 Hungarian universities, and the topics of the courses available from this autumn, while László Csurgai-Horváth presented the master’s degree programme in aerospace engineering, which will start in autumn at the Budapest University of Technology and Economics, for which more than 100 people have applied. Other presentations included the activities and services of the IRF SpaceLab in Sweden, the development of a Perseverance-like vehicle at the Székely Mikó College in Sfântu Gheorghe, the astronomy and space exploration related programmes of the Táncsics Mihály High School in Kaposvár, and the Mars Rover Challenge during the coronavirus epidemic.

The images were provided by the Hungarian Astronautical Society.