Daily radio listenership in nationwide and in Budapest (January-March 2018) 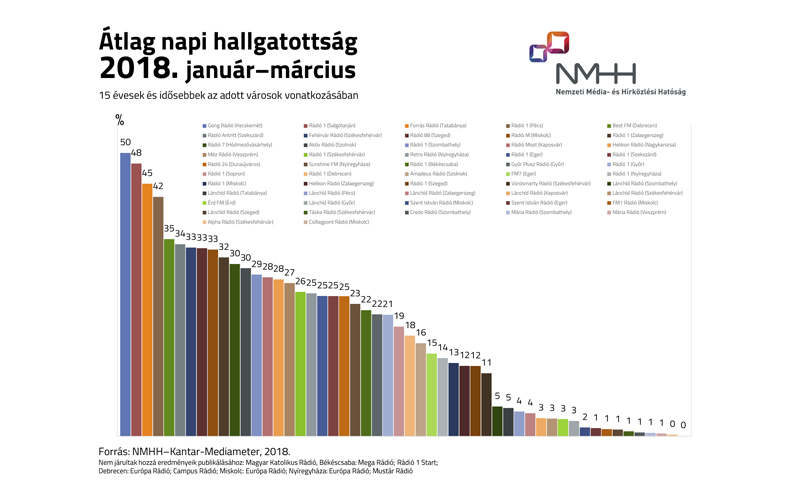 Daily radio listenership in nationwide and in Budapest (February-April 2018) 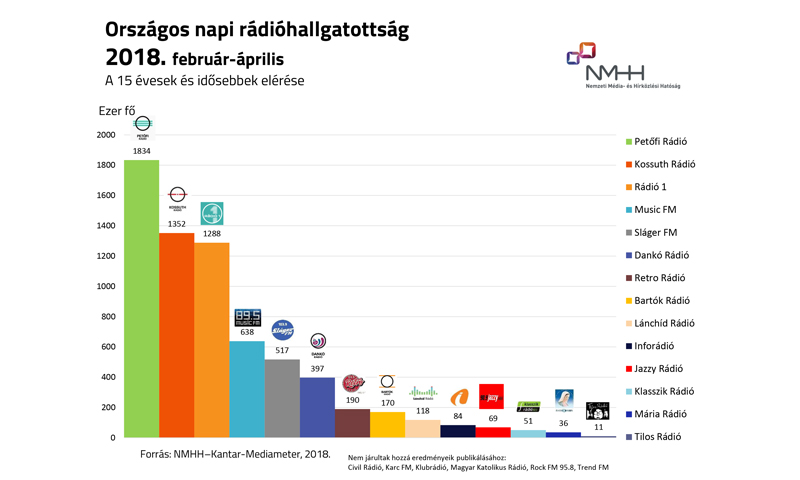 The Authority conducted professional consultations in several rounds in agreement with the operators of the radio market and their representations of interests and in close co-operation with these – among them with media agencies, sales houses, thus, with Radio Sales House as well –, as a result of this, as a solution of compromise, henceforth the listenership measurement of radios in Hungary has to be performed according to uniform principles at the national, Budapest and local levels, broken down to two measurement components, on two samples, with two different methodologies. Thus, the measurement of listenership in Hungary has become of two components, in accordance with the former Hungarian (and some international) practice. In an open public procurement procedure the consortium of M-Meter Kutató és Elemző Kft. and Kantar Hoffmann Kft. has won the possibility of measurement until 2020.

It happens that the measurement of the new methodology brings results that are not identical with the data of the former measurement methodology and this may affect some examined radios badly or it may cause disappointment, which may be a natural reaction by a market operator. In the same way it is also a natural reaction that the doubters would like to check the measurement, similarly to the case of new research results, and novel solutions and applications in other industrial sectors as well. At the same time, all experts participating in the radio listenership measurements do their utmost to disclose professionally faultless results. For this purpose, the NMHH has also built in a quality assurance step before the publication of measurement data. Thus, Radio Sales House criticises the methodology whose development it had participated in itself as well.

With the exception of smaller, local coverage areas, the new listenership measurement basically went back to the previous log-based measurement methodology (which has not been used for national measurements in the last ten years) for radio stations broadcasting nationwide and in cities with county rights as well as in networked coverage areas. In Hungary, the method, as previously applied, produces results through the processing of self-completed logs recorded online and offline simultaneously. This is a significant change, as in recent years the phone-based Day After Recall (DAR) radio audience measurement methodology dominated in most segments of the market. In the previous tender period, this methodology was used for radio audience measurement nationally and in Budapest. At the beginning of that period, in 2013, the Association of Radio Media Providers engaged the same company group that won the current tender to conduct radio listenership measurements. The introduction of logged data was preceded by a short transition period involving the use of both log-based and DAR methodologies simultaneously in order to allow market operators to prepare for the methodological transition, the receipt of results produced with the new methodology and their correct interpretation. Data for the first quarter now reflect log-based results.

1. It is a professional principle that the measurement log does not separate the network radios or the radios that can be listened under the same name from several places according to which locality the radio is broadcast from. At the same time the consortium indicated on the diagrams the name of the locality (in parentheses) whose measurement the disclosed data stems from, with information purposes (for the sake of people less familiar with the radio market). However, during the measurement the separation would not be lifelike and it would greatly impair the interpretability and reliability of the data: namely the people completing the log are not necessarily aware – and it cannot be expected from them either – which locality the broadcast they tuned their device to is from; moreover, as a result of this the increased extent of both the online and offline log would make it more difficult to complete the log, which would damage the validity of the data after all. Thus, the indications “Radio 1 Szolnok”, “Radio 1 Dunaújváros” or “Radio 1 Veszprém” do not appear in this format in the measurement – in the localities where a member radio station of the Radio 1 network can be received, this appears in the log only as Radio 1. This is why the listenership data of such radios could appear among the results of the first quarter of the research which were started only in April, such as certain local frequencies of Radio 1. There had also been many examples for this in the case of phone methodology measurement earlier.

The name of a locality expressly appears in the measurement log only if that constitutes a part of the name of the radio as well. To begin with, the log already includes the name of all the radios (in rotation) that can be received well – in stereo in the case of FM – at the location of the person completing the log under all circumstances based on the registration of the NMHH, but it is also possible that the person completing the log can name a radio that does not appear in the log beforehand (since radio use is typically an activity that is not tied to location, respondents may listen to an online radio or a radio broadcasting in mono from further away (moreover, it is also known that coverage area is greater in good weather or on a flat terrain) or outside their location, e.g. during commuting, on the road or at their workplace). On the one hand, this increases the authenticity of the log in the eyes of the people completing the log, on the other hand, it facilitates the occurrence of genuine radio listenership values to the greatest possible extent.

2. The technical description corresponding to the international professional practice specifies why the measurement data of radios not broadcasting at the city of location of commuters was recorded at the latter. During the last twenty years data have been recorded in this way in all the radio listenership measurements in Hungary, and wide ranging professional conciliation has established it in this tender as well. Namely, this would make it difficult to complete the log if the respondent had to continuously note in which locality he/she listens to the given radio station, moreover, this would make the interpretation of the data considerably more difficult. If the measurement assigned the radio listenership data of commuters only to those localities where they listen to the specific radio station, it would result in a distortion such as e.g. more people listen to radio in Budaörs in the mornings than the entire population of the given locality – meanwhile the measurement would only disclose the radio listeners stranded in the morning rush hour. Thanks to the listenership data tied to locality it is also experienced that the radios broadcasting in Budapest produce a higher access in national data than in the capital city.

3. It is also according to the professional practice that the data of people living in cities with county rights appear in the data of national representation as well, such as e.g. data related to Radio 1. In accordance with the tender announcement conciliated professionally, asking the people living in cities with county rights is part of the national representative research as well, thus, a respondent living in a city with county rights could naturally be included in both published data. When comparing researches performed on different population data, the difference of estimate related to the same population from two different (national and county) samples is a natural phenomenon.

4. It is also a professionally justified requirement that the measurement methodology should allow that a listener can switch radios within a 15-minute period. It is an unambiguous objective of the radio listenership measurement of the NMHH to follow the radio listening customs of people as precisely as possible, thus, the person completing the log can naturally indicate several radio stations within a given 15-minute period.

5. The research database can be accessed continuously and no comment related to this has arrived. The press release states that the database could not be reached “from time to time”, but it does not include specifics regarding which radios could not access the database and when. No comment of a problem related to this has arrived to either the Authority or the consortium. The NMHH expressly requests the operators of the radio market that if access represents a problem, they should indicate it as soon as possible to the consortium performing the measurement in order to ensure that it can be remedied as soon as possible.

As a result of the public procurement tender procedure of the NMHH completed last November, the radio listenership measurements and researches in the Hungarian radio sector at the national, Budapest and local levels are performed until 2020 – based on a unique, uniform and transparent measurement methodology – by the consortium of M-Meter Kutató és Elemző Kft. and Kantar Hoffmann Kft., with significant Hungarian and international professional experiences. The Authority adopted the methodology for audience measurement data recording after a number of consultations with market operators, taking the views of all the interested parties into consideration, and the consortium cannot deviate from that.