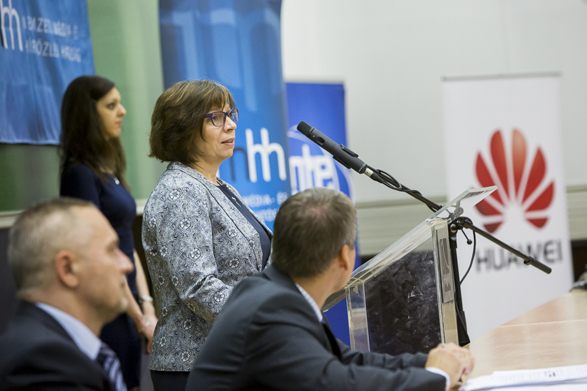 Just as the scientists and professionals of the past decades had shaped the infocommunications technology of the present day, so will the professionals of our time shape the future, which underlines the importance of acknowledging professional achievements of our time, emphasized Monika Karas at the award presentation ceremony held on Thursday at Széchenyi István University in Győr. At the event organised in honour of the 48th World Telecommunication and Information Day and the 150th birthday of the International Telecommunication Union, the President of the NMHH presented this year’s Dr. Endre Magyari medal, awarded to a maximum of two recipients each year, to Head of NMHH’s Technology Analysis Department István Bartolits and infocommunications expert Károly Fiala. 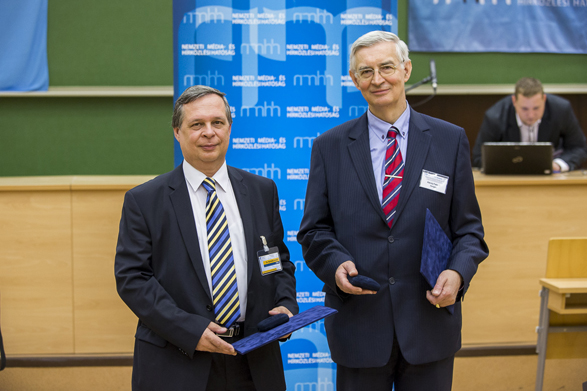 István Bartolits studies the theory and practice of the present and future trends in technological developments and its regulatory implications and represents NMHH in a number of international infocommunications organisations. Károly Fiala is one of the most renowned experts on spectrum regulation, who was among the founders of one of the most active spectrum working groups in Hungary compiling opinions of industry players under ICT Association of Hungary and later under the Communications Reconciliation Council. 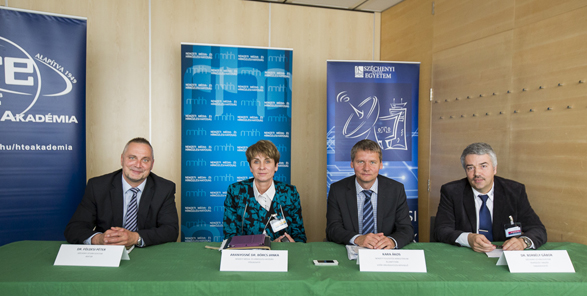 At the infocommunications symposium held in Győr, NMHH’s Director-General Dr. Janka Aranyos-Börcs gave a presentation entitled “Frequencies for mobile broadband” in the mobile broadband section of the event to hundreds of guests. Other staff members of NMHH were also among the presenters on broadband measuring systems, the vision of broadband services and the effects of OTT services on future networks. In addition, industry players were also able to present their research and development projects on the industry day.

17 May is world telecommunication day observed since 1968 to commemorate 17 May 1865, when representatives of 20 countries signed a document to establish the International Telegraph Union. The current name of the organization (International Telecommunication Union, ITU) was adopted in 1932. ITU has been a special organization of the United Nations since 1947, currently with 193 countries (including Hungary) among its members. Hungary joined the Union at the same time as the original founding states but, of course, back then Richard von Metternich signed the document on behalf of the Austrian Empire. Interestingly enough, it was only years after the organization was founded that Graham Bell invented the telephone, yet an international treaty was needed to regulate international telegraphy.

Dr. Endre Magyari (1900–1968) – One of the founding fathers of Hungarian radio broadcasting
He earned his degree in mechanical engineering at the Budapest University of Technology and Economics. He then began to work at the Experimental Station of the Hungarian Postal Service where he was the first to design a high-powered radio telephone transmitter. The 1 kW radio station of Csepel was built on the basis of his designs. In 1923 it was Magyari who installed the 250 W Huth transmitters purchased by the Hungarian Postal Service. The test programme was soon broadcast from the building on Gyáli Street, where the “test studio” was the famous furniture delivery truck. He is renowned for launching radio broadcasting service in Hungary. Magyari’s extensive publication activities are marked by a number of books and magazine articles. By the mid-1940s, the term “weak-current engineering” had been replaced with “communications engineering” and “telecommunications engineering” at his proposal.

István Bartolits graduated in System Technology from the Faculty of Electrical Engineering of the Budapest University of Technology and Economics and has held the title of Honorary Assistant Professor of that academic institution since 2006. He began to work for the legal predecessor of NMHH in 1998 and has been heading the Technology Analysis Department of the Authority since 2010. He studies the theory and practice of the present and future trends in technological developments and its regulatory implications. Representing NMHH, he is a member of the technical working groups of the international Broadband Forum, the T SG 13 and NGN GSI working groups of the International Telecommunication Union (ITU), and he also participates in the activities of the Body of European Regulators for Electronic Communications (BEREC).

Károly Fiala is one of the most renowned experts in spectrum regulation in Hungary. He assisted in the birth of Hungarian mobile telecommunications and has, from the beginning, used his expertise in the service of regulating mobile communications. He has participated in all spectrum sales procedures in Hungary since 1994 and, as an expert in international frequency regulation, is also an acknowledged member of the spectrum expert team of the Deutsche Telekom Group. Mr. Fiala was among the founders of one of the most active spectrum working groups in Hungary, compiling opinions of industry players under ICT Association of Hungary and later under the Communications Reconciliation Council and submitting consensus-based proposals to NMHH. His achievements have greatly contributed to the efficiency of Hungarian spectrum regulation and the Authority has always relied on his professional expertise.