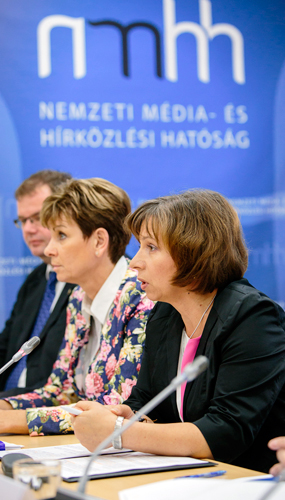 Monika Karas, the President of the NMHH (in the foreground) and Janka Börcs director general | Photo by Gábor Sebestyén

With the use of these frequencies bigger areas will have internet coverage, the standard of mobile services will improve and subscribers will have a stronger position when negotiating services.

Thanks to the successful tender procedure launched by the NMHH, on 29 September 2014 the sale of frequencies unavailable for mobile data traffic before came to an end.

Lending a new momentum to coverage and capacity expansion for mobile broadband services and hence to encourage competition on the mobile market is a top priority for the NMHH.

With the sale of frequencies suitable for broadband services but unused so far, the aim is to quicken the setting up of broadband networks, to develop the Hungarian digital economy and to boost economic competition.

Frequency use intensity is an economic indicator of a country. The larger the geographical coverage and the faster the data traffic, the more secure a country’s digital network.

Expanding geographical coverage, a growing offer of services and a fall in prices

Acting as strategic partners during the procedure, infocommunications providers will launch investments making the areas with broadband coverage in Hungary grow further.

Due to the deployment of the 800 MHz frequency band, which has very favourable propagation characteristics, service provides will be able to introduce state-of-the-art mobile services in areas where, until now, broadband coverage has been inadequate, and so new consumer markets will open up.

This is in the fundamental interest of both Hungarian consumers and the national economy as it further enhances the accessibility of data and telecommunications services.

Available upload and download speed will increase: all domestic users will be given the chance to become a member of the information society. Ultimately, subscribers will have equal chances to access the most up-to-date broadband services at a competitive price, irrespective of their place of residence.
Better service quality contributes to the increase in consumer welfare and competitiveness of Hungarian undertakings.

For subscribers, this brings about a predictable service provider environment and new services all over the country. On the other hand, competition for consumers may result in lower service prices.

The Authority sold the frequency packages in compliance with the relevant European regulation and frequency allocation system, in a non-discriminatory fashion, also allowing for the submission of counter-offers during the tender procedure.

In addition to the existing three mobile networks, Digi will start to develop a new, fourth network. European instances exemplify that a new entrant mobilises and revitalises the market, enhances price competition and engenders new services. The tender procedure made it possible for one or more new providers to compete for the frequencies with equal chances with other providers already established on the market.

Providers earned the right to use the frequencies until 2034. This usage right of 15+5 years ensures the dynamic growth of the economy and represents a guarantee for the sustainable development of the mobile market while offering predictable terms for fostering industry investments. In line with their commitments, some of the winners will introduce the new frequencies to their networks virtually just within a few days.

The new entrant will need about one and a half years to build up its network. Some of the devices already in use are suitable for receiving the new technology (LTE), consumers using the new services will expectedly switch to new devices gradually, but swiftly.

The sale of usage rights for these frequencies of strategic importance will generate an income of HUF 130.6 billion for the general government. The winners are to transfer this amount to the bank account held with the Hungarian State Treasury by 9 October 2014.

The NMHH published the tender documentation for the use of the 800, 900, 1800 and 2600 MHz frequencies on 22 May 2014. By the deadline of 16 June Digi Távközlési és Szolgáltató Kft., Magyar Telekom Nyrt., Telenor Magyarország Zrt. and Vodafone Magyarország Zrt. had submitted their applications. The Authority commenced the inspection of the fulfilment of formal criteria without delay, and called on applicants to correct deficiencies in order to get more accurate and additional information while observing the relevant rules of procedure. On 1 August all four applicants were registered by the NMHH. On 1 September 2014 the Authority called on Magyar Telekom Nyrt., Telenor Magyarország Zrt. and Vodafone Magyarország Zrt. to submit a counter-offer. On 29 September the NMHH announced the four winners. Within 50 days from disclosure of the tender results the NMHH will sign a contract with the winners. The agreements stipulating the terms of frequency use have the benefit of creating an appropriate foundation for reconciling the interests of infocommunications providers who play a strategic role in Hungary's digital economy and the subscribers in a forward-looking manner.