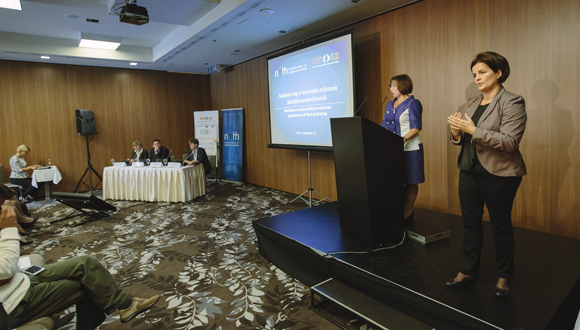 The conference was opened by Monika Karas, President of the NMHH who pointed out that access to and the availability of cultural goods should be ensured to all in an information society. To this end, the NMHH is committed to enabling all Hungarian television viewers, including those with a hearing impairment to exercise their right of equal access to cultural information and goods on television.

In his speech Ádám Kósa, President of the Association underlined the importance of getting acquainted with the foreign practices of making television accessible and the adoption of good solutions, especially since from 2015 onwards commercial and public service TV broadcasters with national coverage will be required to provide hearing aid during their entire broadcasting time for all programmes defined in law, including cinematographic works and public service programmes. He also added that accessibility was already a requirement for a certain part of broadcasting time, including news and political programmes, sports and traffic news as well as weather reports. According to the President the Hungarian regulation made an incredible progress underpinned by tremendous advocacy efforts and a search for consensus.

Lidia Best Smolarek, Vice-President of the European Federation of Hard of Hearing People was also present at the event and said that one of the Federation's goals set for 2020 was to make television totally accessible by that date and to generally introduce the use of subtitles in theatre, cinema and DVDs. She pointed out the Dutch practice where out of the 17 million inhabitants 1.6 million people live with a hearing impairment, but 5.4 million viewers use subtitles. A regulation according to which at least ten percent of the television programmes transmitted must be accessible has been in force since 2011 in Poland. Several countries face problems due to the lack of clear and detailed requirements as well as the ambiguous distinction between them.

In her presentation Ágnes Vass member of the Media Council introduced the judicial practice that can be delineated when looking at the cases of violating the provisions concerning programmes accessible to hard of hearing people. Media service providers, that is, give different interpretations of the statutory provisions on the accuracy and concurrence of subtitles among others. Decisions of first instance by the NMHH in such cases were challenged by the condemned media service providers in 29 instances over the past three years, and the judicial review resulted in a decision in five cases so far. The relevant case-law shows that the courts interpret subtitle accuracy as closeness to the original text and only a delay of 1 to 2 seconds in display should be allowed for it not to become disturbing.

The staff of the NMHH delivered a number of presentations at the event to sum up the experiences of the audits and surveys made by the Authority. According to their information in the last three and a half years, since the new Media Act entered into force there has been a growing number of television programmes featuring a hearing aid and the quality of subtitles is also on the rise. Media service providers have in many cases exceeded the required yearly number of hours, yet there are still some shortcomings as regards the display of accurate and complete subtitles, and the current range of genres should be expanded as well to include more children's, informative and religious programmes. It is not yet clear what accessibility method should be followed in the case of live programmes, with special regard to musical shows and sports events. Similarly, it is yet undecided what hearing aid should be used for hard of hearing children who cannot read yet – the Authority is awaiting suggestions from SINOSZ and other advocacy groups in these matters.

Attendees also learned that the NMHH conducted a separate survey among hard of hearing people to get to know their opinion on this issue. According to the results two thirds of hard of hearing people and 55 percent of deaf people prefer subtitles to sign language interpreting when watching television, and one third of them considers the concurrent use of both confusing. 38 percent of the social group concerned thinks that the quality of subtitles improved over the past year, while according to 9 percent it deteriorated and 23 percent felt it did not change.

At the conference the results of a survey commissioned by the NMHH to map up the efficiency of subtitles and sign language interpreting as perceived by hard of hearing people were also presented. The research, which included eye-tracking tests, a subsequent interview to assess understanding and the registration of opinions, showed that multiline subtitles help deaf people to understand what is being said to a greater degree than single-line subtitles as they can re-read the lines. Sign language interpreters diverts the attention of all participants – people whose hearing is intact and hard of hearing or deaf people alike – as it represents too many stimuli at the same time. An erroneous subtitle on the other hand makes understanding more difficult even for people with normal hearing capacities and virtually impossible for all groups of people with a hearing impairment, so it is particularly important for media service providers to seek to provide good quality subtitles.