Currently, four meteorological stations are in operation in Hungary under the supervision of the National Weather Service (OMSZ). The radar of each station operates in the 5 GHz frequency range: the Gilice tér radar in Budapest uses the 5,625 MHz frequency, the ones in Pogányvár and Napkor use 5,610 MHz, and the one in Szentes-Lapistó uses 5,640 MHz. However, not only the meteorological radars, but also wireless local area network (RLAN/WLAN) – commonly referred to as Wi-Fi–devices operate in the frequency range between 5,600 and 5,650 MHz. 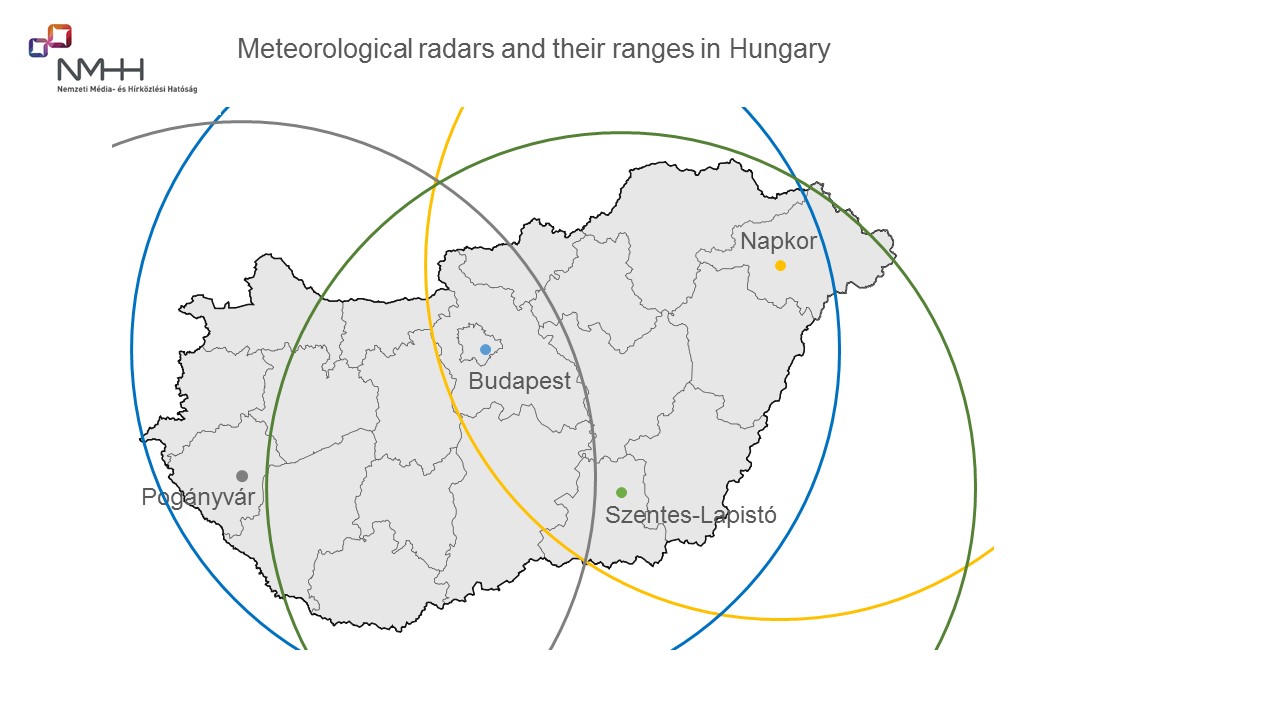 The use of wireless devices in the frequency range also used by the radars is allowed by the currently effective frequency regulation, but only on the condition that the devices may not interfere with the operation of the meteorological radars in any way. For this reason, only wireless devices capable of dynamic frequency selection (DFS), i.e. ones that automatically retune themselves to another frequency when detecting the radar to avoid interference, may be marketed in Hungary.

However, devices manufactured or purchased a longer time ago, as well as those of uncertain origin may possibly lack such radar detection (DFS) functionality, or it may not function properly. Another problem may be that the DFS function is not turned on “by default” in the device, or that the user has turned it off – possibly accidentally. Problems may not come only from this part of the configuration, but also if the user tunes their device deliberately to the frequency band of the radar. In these cases, the device may interfere with the operation of the radars to a great extent; moreover, multiple such interfering devices may be located in their range at the same time, which may block a significant part of the radar image. So, the typical devices causing interferences are misconfigured high-performance outdoor RLAN-devices or devices transmitting images of security cameras wirelessly.

It is essential for the operators of such devices – i.e. primarily not traditional ones that can be found in every household, but rather higher-performance wireless devices used for industrial purposes – to check if their configuration is correct, or have it checked, activate the DFS function, or update the software of the device if necessary in order to use it on the correct bandwidth, in good quality, and last but not least, in a lawful manner.

The lack of information may lead to serious emergencies

Similar interference issues are causing problems not only in Hungary, but globally, making it considerably more difficult, or in certain cases impossible for meteorologists to accurately forecast the formation of thunderclouds, which may have property security or even life-threatening consequences in addition to everyday inconveniences. Air traffic control also uses the information of these radar measurements when, for example, an aircraft should bypass a thundercloud, and these data are used by authorities involved in disaster prevention and recovery, but incorrect meteorological radar images may cause serious damages in agriculture as well.

When NMHH detects an interference, it searches for the source of interference with its sensor-equipped cars, and if the causer of the interference is unwilling to modify the configuration, the Authority shall proceed, have the device turned off or remove it from the site, and in recurring cases, it may even impose a fine. The number of wireless devices, and thus that of interferences is increasing constantly – only this year, more than seventy such cases have been eliminated by the Authority, the majority of which have been discovered in the catchment area of the Budapest radar.