The actual broadband supply of the country can be plotted well based on the large amount of real-time data received through Szélessáv.net, the internet measurement service of NMHH. In the past two years, 2.3 measurements have been performed on users’ measurement devices requested free of charge, 420 thousand measurements have been performed by registered or anonymous users through the website, while some 3.5 million by the sensor-equipped cars of NMHH, from the entire territory of Hungary, thus, data collected concerning nearly 3,500 municipalities in total are kept in the system. The site, having over a thousand visitors daily, makes it possible to measure not only the download and upload time, but also the latency, a too high value of which may cause issues in live online chats or online games.

How can services be checked?

This can be performed in three ways: on the one hand, anonymous measurements can be performed on the site (Kihagyom és mérek (Skip and measure) button), on the other hand, the past measurements of consumers are easily accessible as well following registration (these can be performed on a mobile phone or a desktop computer as well in both cases). In addition to this, a free measurement box can be requested from NMHH in the Hardverpartner (Hardware partner) section of the site; this performs measurements automatically at all times of the day, even when there is no traffic on the home network, thus, providing an even more accurate result. This opportunity was taken by 246 people so far.

Using a measurement box, additional information can be obtained concerning whether certain services, e.g. bitTorrent, HTTP or SSH data transfer, online video playback, or certain email applications are restricted by the internet service provider. The measurement box also records package loss and the variation of latency, which show the changes in the quality of audio and visual content, as well as the congestions emerging on networks. From the end of the year, these additional options testing net neutrality will also be available for measurement on the site Szélessáv.net using the self-developed software of NMHH. In addition to this, sensor-equipped cars are also used by NMHH for data collection, and for the measurement of the quality of mobile internet services. The results of all identifiable measurements – originating either from NMHH or from the users – end up in the database of the metering system, and the aggregated results are available at the site Szélessáv.net.

Among other things, the non-representative data of measuring points show that the download and upload speed offered by service providers can be actually utilized at three quarters of the measuring points. In the case of most service providers however, the variation of speed is high depending on the network technology (ADSL, coaxial, optical), the time of day, and network load, and the value measured in the peak period is lower than the speed values offered: on average, only 82 percent of the download speed advertised can be measured between 8 and 9 p.m. The increase in latency originates from the network technologies themselves, as well as the congestions that may occur on the network. In practice, latencies measured in milliseconds (ms) can result in a significant waiting time when downloading data or talking online. Based on the analysis by technology, in 65-70 percent of cases, the latency of mostly optical networks is typically 1-5 ms, and that of coaxial networks is typically 6-12 ms, while networks based on the ADSL technology typically cause a latency of 18-30 ms, but this is where the standard deviation is the highest as well. The latency depending on the technology can also be increased as a result of congestions that may occur in the network, during which an increase of latency by a few times 10 ms, but in more extreme cases, even by 100s of ms can be shown. 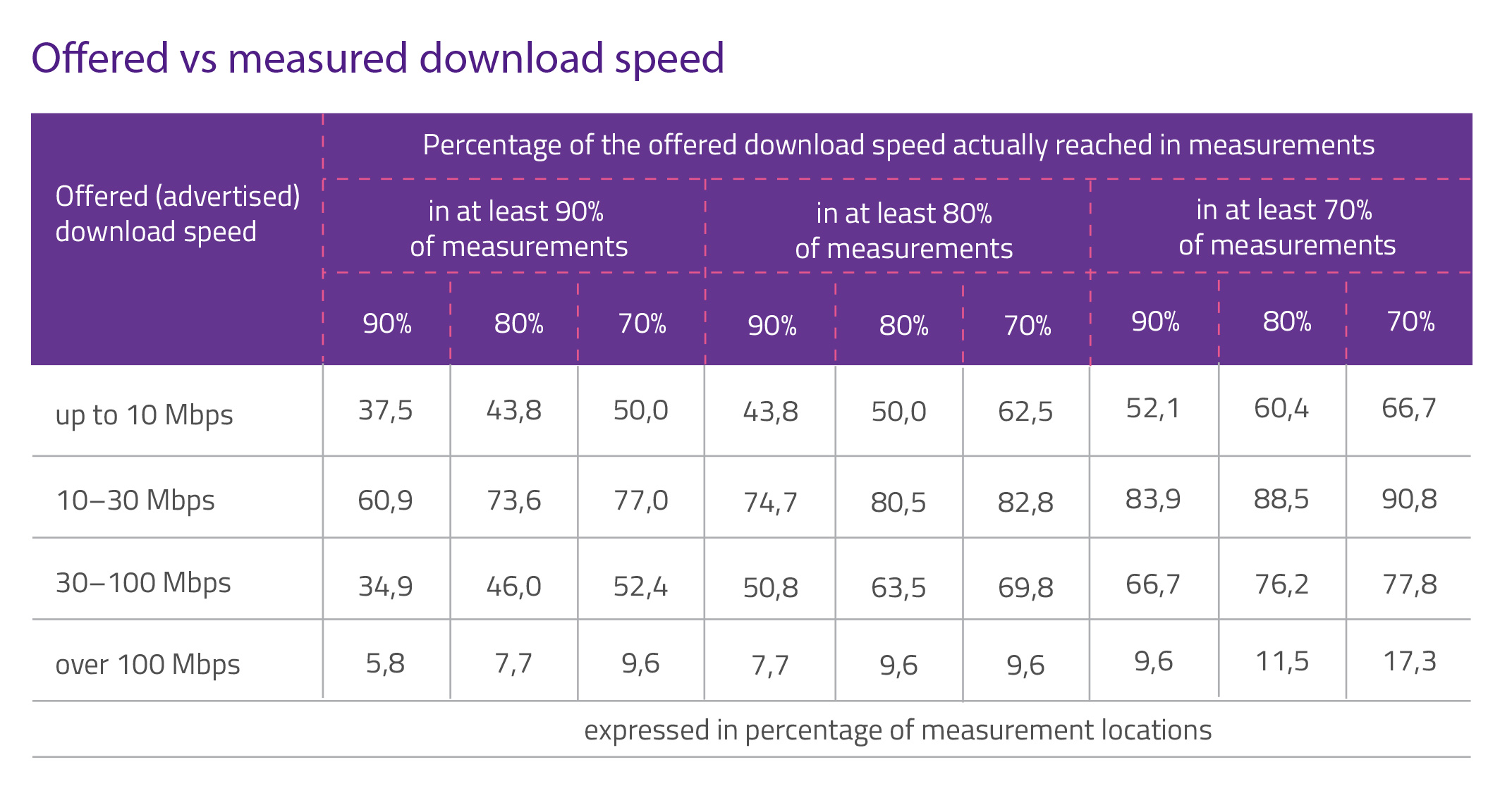 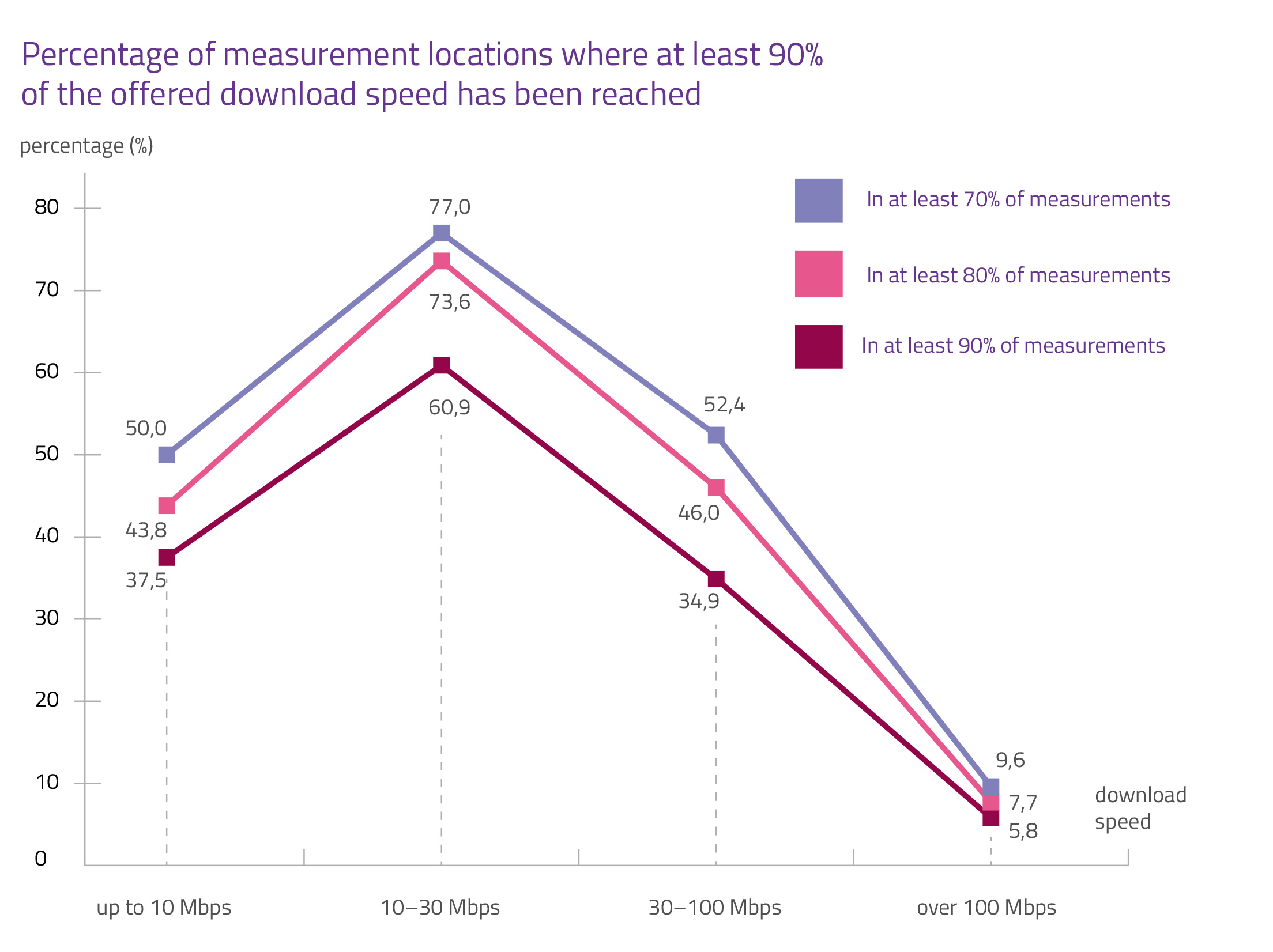 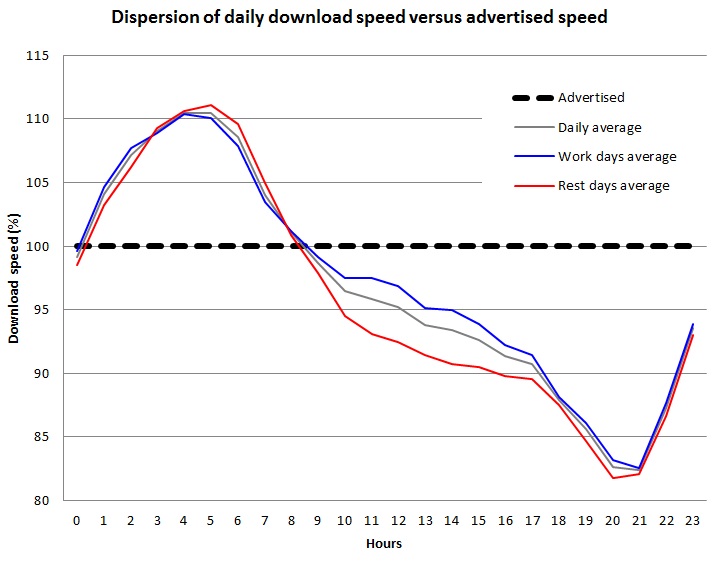 There have already been internet speed measurement sites, why was creating another one necessary?

The site Szélessáv.net has been created by NMHH to ensure that the key features of broadband services can be checked using an independent database containing the regular measurement results of the Authority and the users, which is continuously validated. Although various other applications measuring download and upload speed exists, but the measurement methods of these are not uniform, or optimized for a given country, thus the reliability of their measurement data is of different degrees. Szélessáv.net provides objective information concerning the real quality parameters of domestic broadband services. The large amount of metering points – the measurements of the Authority and the users are also included in the database – promotes subscribers having a detailed, nuanced picture concerning actual market practices, which may be a basis for comparison to make an informed choice of service provider or to check the quality of the service already being used.

Thus, the broadband measurement system of NMHH improves transparency and increases market competition. This is one reason why it is important for as many internet users as possible to have measurement devices countrywide, and that measurements are performed regularly on the portal in addition to the official measurements.

Owing to the regular measurements, the consumers are becoming more and more informed concerning the quality of services they use and of those of the competitors – on different days and at different times of day. By means of the measurements, the characteristics of the already existing services can be learned in more detail, and a more favorable choice can be made between service providers, and also between their alternative services. In possession of the results of the broadband measurement system, NMHH, as well as the entire user community receives objective facts concerning the broadband supply and quality of the country. At the site Szélessáv.net, useful information can also be found, including all the things that should be taken into consideration when choosing a service provider, the legal obligations of service providers, and the factors that influence the speed of an internet connection. 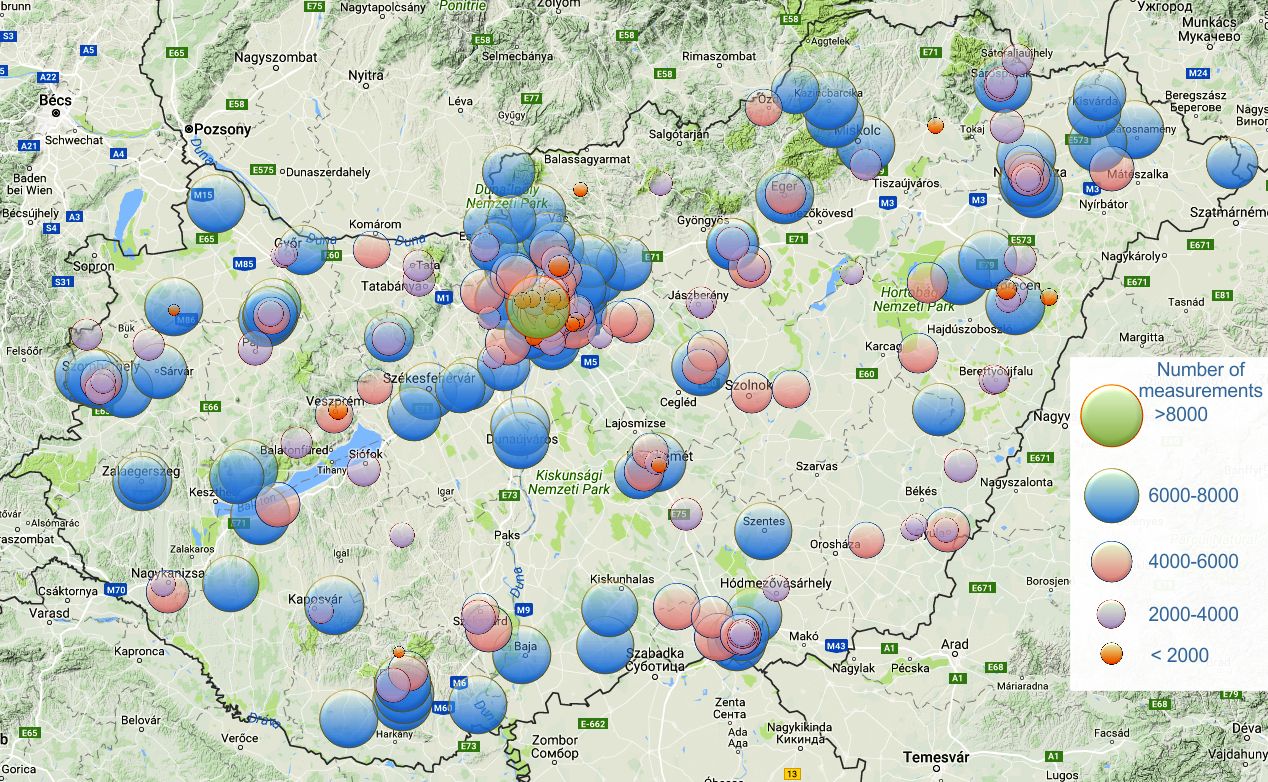 Spatial distribution of the 2.7 million measurement points of NMHH